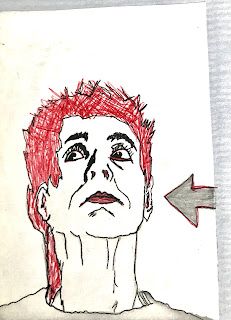 “But it had been awhile since his last redhead, since he’d been flattered by any beautiful woman. These days were different days.  There was something technical about them, undistinctive. You couldn’t tell the scientists from the vandals. You could order viruses through the mail- pathogens, toxins, what have you. A clever schoolchild could wipe out all the bees in a meadow during recess.  They were breeding rhinos with no horns to make them less desirable. “

Joy Williams The Quick And The Dead. 2000

When I was born, I was a redhead.  So said my mother, who should know, as she was there. More colours came later. A veritable rainbow. I’ve always had good hair, joking that my ancestors traded good hair for a lousy cardiovascular system.  Can I prove this claim?  At my age, we are allowed to exaggerate.  Do your own research, bud.

Lately, in the Canadian fashion, I am going for the silver, mind you, not all over, just enough to be distinguished, as in “When we say someone is distinguished, we're expressing respect for them, as in "that hairstyle makes you look quite distinguished"

Usually, someone distinguished is older.  And I can identify with older. Of course anything past being born is older.  It’s just a question of degree.  But good things come to those who wait.  Apparently, somebody wrote me a song. You may have heard it before.

You know which song I speak of goes like this:

“Will you still need me?
Will you still feed me?
When I'm sixty-four”
She still needs me.
She still feeds me.
She still loves me.
And I need her.
I occasionally feed her.
And I will always love her.
This past year was a doozy, as the scientists say.  I got a refurbished heart, good for a few more miles at least.
There has been countless times I could have been totalled, a write off.
But for the love of a good woman….
Anywho, I’m still standing.   Except for now. I am sitting. Pondering, ruminating, letting the mind wander, off leash.
Hopefully I have more songs in the tank.
What is it with the car metaphors?
Regrets, I’ve had a few.  A few too many, too many times.  That legend is history.  Respect your elders. Get off my lawn!
Note to self: you don’t have a lawn.
Take everything I say with a grain of salt, and when I say a grain, I mean a grain, as I need to be mindful of what fuel I feed my refurbishment.
Phil Ochs wrote a song called rehearsals for retirement.
Sounds better every day.
Wondering how I’m doing?

Send me a postcard, drop me a line!

Indicate precisely what you mean to say.

Yours sincerely,
Wasting Away
Posted by dense milt at 6:31 PM