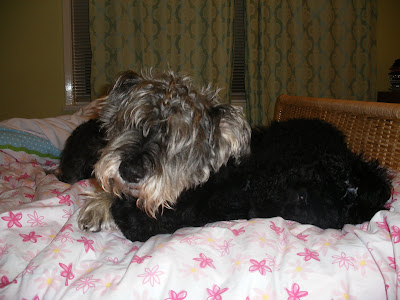 My dog Max is a survivor. Here he is cuddled up on my daughter's bed with Toodles, our 6 month old black standard poodle puppy. Max is a schnauzer, and he looks like Tramp from the movie Lady and the Tramp.
We 'inherited" Max from my father in law; he came with the house.
Max had been a rescue dog, rescue from an abusive owner from when he was a puppy. They cut out his vocal chords to stop him from barking. It didn't work; he just barks with attitude.
In the old days, he would bark all day. Barking at the world, that's his job, we would joke. A few years ago, Max had a tumour on his rear leg that needed removal. A year ago, his buddy, my father in law died; Max waited for him at the top of the stairs for weeks.
This last year Max was my best buddy as we both recovered from our various injuries. Max had pulled his claw out from his paw, and licked at it until one vet decided to operate and remove the claw. Unfortunately it just got worse, and we went back to the country vet we love and he had to take off part of the paw. As the months went on, the paw still did not heal. We took him to a third vet for a consultation; they said it was probably cancer, and recommended a biopsy and removal of most of the paw. We went back to the country vet, who carved a bit more off the paw, and sent that out for tests. He said, it is probably nothing to worry about.
Well, the tests came back and it was cancerous. So more of the paw was removed.
About that time, we noticed a large lump on his rear leg ( where the first operation had taken place). We took him back to the vet, and they removed the lump.
People wonder why some people spend so much money on their animals. Well, they really become a part of the family. Max survived his paw injury, and his leg cancer, and both have healed nicely.
One day, I noticed him struggling to get up. He wobbled, and was walking in circles. His head was tilted, and he would not eat. Then he fell over and started convulsing. I took him back to the vet. We forcefed him some cat food, and he seemed to improve. We took him home and gave him raw meat for a while, which he loved. This happened a few more times, until we took him back to the vet, and he sadly informed us that Max had not had a stroke; he probably had a tumour on his brain, that pressed at different times, causing the strange behaviour and actions.
He said to take him home and love him, that's all you can do.
Now I carry him down the stairs, as he can't navigate that himself. The other night I carried him down the stairs and put him down so that he could do his business. Toodles, the poodle pup followed after him. It was pitch black out in the backyard, and I turned to go back up the stairs when I heard a splash.
Max had fallen in our pool. The water was ice cold, and he was in the deep end. I ran to his side and could see him flailing in the water, trying to right himself. I reached in and was able to grab his tail. I then grabbed a leg, and pulled him out of the water. Needless to say, he was in major shock, and struggled for a moment to get rid of the water in his body. As he wobbled, I scooped him up and held him close. My wife and daughter ran to get towels, and my wife held him and dried him, with a heating pad and towels that we kept warming up in the dryer. My daughter went on yahoo to ask her cyber community for their help ( she does this for most things). I called the country vet, who asked about the conditions, and then advised we give him brandy and water, keep him warm and dry. We did this, and after a short time, Max was ok again.
Today he is back on the job, sleeping on the job, as that is his job (when he isn't barking at the world). He inspires me with his survival skills, and his courage in pushing on.
SCOTTY UPDATE: Keep those prayers coming for Scotty, as he will have the first operation on Thursday. At that point, we may know more about what is to come. Survival and recovery from spinal chord injuries are determined by many factors; beyond the physical, the most important I understand is the will to carry on and the fight in the individual. Miracles do not happen overnight, but they do happen. Like Max, Scott is a survivor, who has made so many great friends all over the world. We are all pulling for him, visualizing that vertebrae fusing back together to protect the spinal chord.
Posted by dense milt at 8:44 AM No comments: