This Bomb is Personal 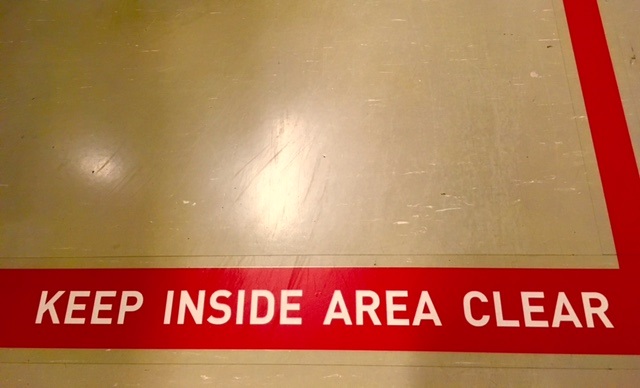 I have a bomb in my body.  It could go off at any time.  Unlike other bombs, this bomb is personal.
It will most likely not kill others around me.  It has my name on it alone.  It is my bomb.  That said, there may be collateral damage. It is unavoidable. Please accept my apologies now.

I can hear it ticking right now, and that is good thing. As long as the bomb is ticking, I am safe.  I am good to go.

This personal time bomb is of course my heart.  It takes a licking and keeps on ticking.

Recently , I had to call in the bomb squad.  More accurately,  I walked myself to the local  ER, which is only a few blocks away. That is a good thing.
I took my bomb and asked the experts in the ER to help me understand if the pains that I have felt consistently for the past week were in my head or in my heart.  I wanted to know if the pin was loose.
After about four hours, they completed their inspection.  While they did not doubt the
pains in my chest were real, the experts could not tell me why without further tests.
They did confirm that my bomb had not gone off.  There was no evidence of a recent attack.
Nine years ago, the bomb went off. There were no casualties, but hello! Call it a wake up call.

Once again, I passed with flying colours.  My bomb is safe and intact, and not in any immediate danger of going off.

What am I to make of this?

Have we reached a Detente?
Are we entering into Peace talks?
Should I expect A Cold War?
Was I just having the male equivalent of A Hot Flash?

Hopefully, me and the bomb will come to a better understanding.   After all, we do have to live together. We depend on each other.  What happens to the bomb, happens to me.  And well, shit happens.

For now, the situation is temporarily defused.  The bomb is still ticking.

But there is little doubt that one day, the bomb will go off.  One day, 0my personal bomb will shut me down. My shelf life will be up.

I remember an evangelical preacher, who told me in teens, to be afraid.  Very afraid.  Because God was going to get us, because we were all evil because of Original Sin.  You could slip in the bathtub and die tonight.  You could be killed riding home on a bus, or driving a car.  A toddler could shoot you.  Terrorists, jihads, nuts, strangers- there is a whole schmorgasbord of fears to choose from.

The important thing is to relax, breathe and not focus on the fear.
I try to focus on the love, the music, family, and friends.  I am blessed with so much love.
And Life goes on until the day that it doesn't.

I do not have control, but I do have my bomb.  My own little personal bomb.  And I am happy as long as it keeps on ticking. Tick, Tick, Tick...
Posted by dense milt at 5:05 PM No comments: 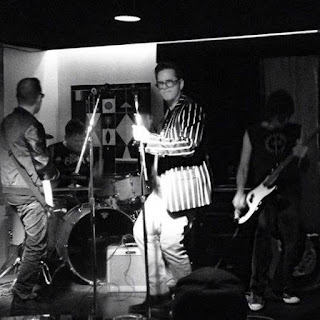 Although I bring a certain confidence on stage,  I am always nervous as hell before, and hyper-critical after.  I am my own worst critic.  But when the performance is happening, and that mind/body connection is working right, there is no greater feeling.  I get lost in the music. I can only give you everything.

Performance is similar to being intimate with someone, in that you are feeling and smelling and listening and vocalizing and staring intently into eyes. You are not thinking of anything else at that moment.  You focus only on the beauty of the moment.  If you cannot bring that focus, just forget about it. Go home right now.  Do us all a big favor and hang up the gloves.   If you are thinking about someone else at this moment, then you are not in the right bed.

I have different rules when I watch other people perform.   I call it the Sandwich Test.
Am I getting caught up in their performance, thinking of nothing else or is my mind wandering?
Rarely do I relax and just be the fan.  I begin imagining myself up there on the stage.   I begin thinking about what kind of sandwich I could be eating.

What choices would I be making?  White, Rye or Sourdough? 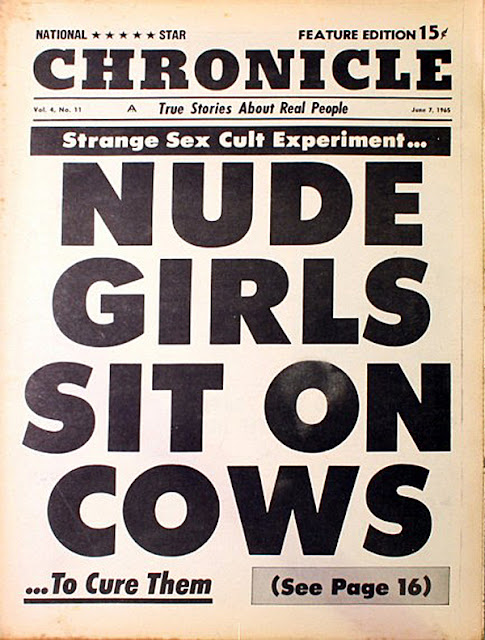 To  cure them of what?

To cure them of being a cow?

To cure the girls of being nude?

This is a classic "teaser" from 1965, a time when attention grabbing was much simpler than in 2016.

The year was 1965.
I was seven.
I remember the first party that I ever went to at Johnny Mercer's house in Missoula, Montana   Yeah.  Even his name was cool.  He had a Beatle cut, and a stylish little Beatle suit.  I probably was sporting a crew cut, but I still had all my teeth.   Only a year later, I was to chip my front tooth, and had to bear the shame of a silver cap over my front tooth.

I guess I was Gangsta before my time.
Johnny's party was co-ed, which was also a first, and the music that he played was of course The Beatles.   Rubber Soul was my favourite. A certain song about a girl named Michelle, planted an attraction in my head some 10 years ahead of the time when a certain Michelle would come into my life.
Consider that I met my future wife when I was in my last year of high school, bored with the status quo, I decided to take an acting class at Capilano College, travelling once a week from Richmond to North Vancouver.There I met many very cool people, including a skinny girl with long black hair named Michelle.
She had a psycho boyfriend at the time, which cool girls did.   I had a girl that I was "in love" with who was younger than me, but who was also going out with an older guy named Jim.  Later in life our paths would cross again, as Jim was re-born as I Braineater.
At Cap College we had a teacher named Kayla Armstrong, who was from New York.  Doesn't get any hipper than that, kids.  She was smart and edgy and inspired us all.  I met other friends in this class, including local actor Robin Mossley.  Kayla and her husband Robert put on a series of one act plays, and Robin and I were given the challenge of performing Edward Albee's Zoo Story.
Even then I was being typecast with the psycho roles, so Robert switched it up, and cast me as Peter, the quiet mild mannered guy who encounters an outsider named Jerry.  As Wikipedia states:

"Peter and Jerry meet on a park bench in New York City's Central Park. Peter is a middle-class publishing executive with a wife, two daughters, two cats and two parakeets. Jerry is an isolated and disheartened man, desperate to have a meaningful conversation with another human being. He intrudes on Peter’s peaceful state by interrogating him and forcing him to listen to stories about his life, and the reason behind his visit to the zoo. The action is linear, unfolding in front of the audience in “real time”. The elements of ironic humor and unrelenting dramatic suspense are brought to a climax when Jerry brings his victim down to his own savage level.
Eventually, Peter has had enough of his strange companion and tries to leave. Jerry begins pushing Peter off the bench and challenges him to fight for his territory. Unexpectedly, Jerry pulls a knife on Peter, and then drops it as initiative for Peter to grab. When Peter holds the knife defensively, Jerry charges him and impales himself on the knife. Bleeding on the park bench, Jerry finishes his zoo story by bringing it into the immediate present: "Could I have planned all this. No... no, I couldn't have. But I think I did." Horrified, Peter runs away from Jerry, whose dying words, "Oh...my...God", are a combination of scornful mimicry and supplication."
Even as the "quiet guy", I was the killer.
Later that year, I was to play the role of Charly in my high school production of Flowers for Algernon.  Charly was a mentally challenged adult, who is given drugs that make him a genius.  Unfortunately, like many drugs, they wear off, and Charly returned to his simple minded ways by the end of the play. Thinking  back I cannot imagine memorizing all those words, when I am dumbstruck now even trying to memorize the words to Born to Be Wild!  But that then, and this is now.
In another one act play at Cap, I played the troubled violent man in Tom Walmsley's play The Working Man, where in an act of stupid Method bravado, I kicked a fellow actor in the head.   This actor happened to be Susan,  the best friend of this girl Michelle.  We can all laugh about it now, but at the time, even I was horrified by how "into the role" I had become.
Two years later, I was at Langara, taking theatre there, when a teacher sent me into battle in a game of "status" with another fellow actor.  By the end of the "scene", I had the poor guy in tears.  I would now see this as irresponsible direction by the teacher, and certainly, a confusion in my young mind as to the difference in how to play a character versus inhabiting a persona, that was becoming far too comfortable.

A few months later, I was forced to sit in a lighting booth in the dark during a technical rehearsal, while my  actor friend was able to go see Patti Smith, my hero, at the Commodore.  I decided then and there that acting was not my gig.  I needed to live life before I could play someone else's life.   I was drawn to the punk aesthetic of DYI, where I could be actor, performer, writer and director all in one.   The sugar water of the early punk scene drew my "human fly" ego to it, and it has never let go.
Somewhere in all that confusion of ego, performance, sexuality and sound, I found my way to bring a certain girl named Michelle back into my life.   Fate was calling me.  Like nude girls sitting on a cow.

Posted by dense milt at 1:07 PM No comments: