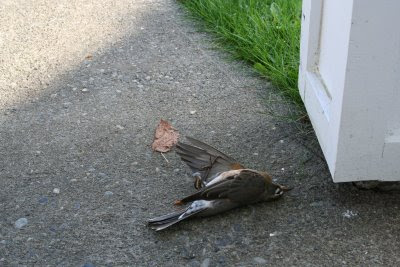 It was a morning in October. I was sitting at the desk blogging when I heard a thud against the window. A few seconds later I heard a second thud, and I rose to look out the window. Below me on the ground were two birds, robins I think.
One was lying there - the one in the picture- and one was standing guard over her, waiting for movement, a sign of life.
I watched them for about five minutes, and neither of them moved.
I went downstairs, and quietly opened the door. Still, no movement.
The bird in the picture was dead, killed after crashing into the windows, once or twice. The other bird was watching her, like in the song Someone to Watch Over Me. He did not move as I approached. I gently motioned toward him with my foot. He did not move. I touched him very gently. He did not move.
I saw a neighbor and motioned for them to come over and witness this with me. She said, Oh my god, Robins mate for life. One is the female, and the other is the male. He won't leave her.
We both approached, and still, no one moved.
I said, I've got to get a picture of this. I went inside to get the camera. As I came out, and prepared to take the photo, the male bird finally moved, and flew off. I had missed my opportunity to capture the moment.
Still, as you have read, the moment was captured in my memory. The scene of devotion, and connection, and reverence touched me. It still does. Many people talk about birds and animals as if they have no feelings, but it is obvious they have complex emotions. What was going on the bird's brain and heart as he stood guard over his beloved? What was he feeling? Could words express his loss? One moment they were flying, and the next moment, life changed for both of them in a way that neither could imagine. Not that different than our lives, is it?
Posted by dense milt at 10:42 AM 1 comment: