Hate is a Lousy Drug 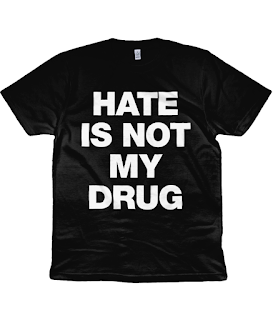 “So let's leave it alone 'cause we can't see eye to eyeThere ain't no good guy, there ain't no bad guyThere's only you and me and we just disagree”  - Dave Mason

Neo nazis vs everyone

Ever get the feeling we are sliding down a slippery slope of Hate?  From two thumbs up to middle fingers, the digital world has its finger on the pulse, and the pulse is quickening. People quarantined in their hovels, looking at tiny screens, their only connection to the world, getting angry.  We shout out to our echo chamber of friends, and our opinions are echoed back, reinforcing original bias, original sin, and replications of nothing too original.

Ads pop up for anything you have recently googled, and yet people are worried about Bill Gates wanting to implant chips to know your inner most thoughts.  We are already fairly controlled, no need for implants.  We debate the truth about just about everything.

Read about the latest shooting, and get redirected to deniers talking about crisis actors. And little by little, after all the buttons are pushed, our world becomes darker, more narrow.

We “see” the people we disagree with as “others”.  We have become inured to the humanity of those whom we differ from.

Some people are angry at those who reject vaccines- the anti-vaxxers.

Flash forward two months, and the latest variants are affecting a greater percentage of people who have had their vaccines.  How does that figure into the vaccines “good/ not good vaccine debate and dichotomy?

Well, simple math.  Vaccines don’t make us immune, they don’t makes us invincible or invisible.  They simply reduce the virility of the virus.  And since we have more people who are vaccinated in our region, it makes sense that more people who have contracted the virus variant, are likely to have been vaccinated.

Other by-products of the pandemic include loss of employment, loss of business, isolation and factionalism.  The new math is Fractions of factions.

Within the vaccinated faction, we have those who listen to the government and Public Health officials with complete confidence.  This faction can get defensive when another faction of the vaccinated criticize the instructions or public health orders,

Some feel the PHO goes too far.  They wan to dance have fun have freedom.

Some feel the PHO do not go far enough.  We need lockdowns, less freedom for our protection, more enforcement.

Some feel the PHO responses are so wrong that they constitute eugenics.

Lately there is so much diversity of opinions among the vaccinated, that the government is trying hard to get us to remember the unvaccinated.   Oh yeah, we forgot about them.

The non vaxxed ( hesitant, resistant, and the vociferously anti-vaxx to the max - conspiracy lovers) within in our region, and within Canada, are a small minority of the population.  In the US this faction is considerably higher, and their decisions more motivated ( and manipulated) by politics and religion.

Don’t forget the urban and the rural divide, also racial, economic and cultural differences.  Further complicating all the divisions in the US are the profusion of guns, which like another virus, have been replicating.

This replication of guns and virus and divisions are accelerated by the Fox “news” virus, countered by the Fake news virus.  Compound these divisions with the Big Lie, and the Russian Republicans, hell bent on limiting voting.   Of course any vote that disagrees with The Donald, be it black, Hispanic, socialist, liberal, or Lynn Cheney, is wrong, fake, or  fraudulent.

America is sliding toward autocracy, Russia is controlled by oligarchs, and Canada is divided by geography, identity and economy. The fans of Hate are blowing out lots of air lately, further demonizing those who disagree.

Can’t we all just get along and love the Raptors?

All of these divisions just help us to be better conquered. Hate is a lousy drug, worse than cocaine.  Yet Hate is becoming the drug of choice.

And as angry as I get with certain factions, and make no mistake, (as a cranky guy over 60, I am not immune,) I see the danger of this problem as it is manifesting and being manipulated.  The more we make those we disagree with into the enemy, the more we make it easier to hate that enemy, to see them not just as disagreeable, but less deserving, and ultimately less than human.

I remember being at a trade show, when the President of a company that our company did business with came by our booth.   He started talking angrily about the situation in the Middle East.  This man was a Zionist, who said the Palestinians were lower than dogs, subhumans who deserved whatever death could be given them.

I also remember picking up a Japanese customer who spoke about the various countries and their people in his part of the world.  There was a natural order he said. On top was Japan, then Korea, which should really be part of a Japan, then China ( did not speak of Vietnam, Cambodia, Laos, etc, but did not hesitate to mention that the lowest were the Filipinos, who were thieves and dogs and not to be trusted. They were dogs as well.

Funny how the worst epithet of both of these bigoted business owners was to call their enemies a dog.  And then to advise that they needed to be “put down”.   Do you think they were dog owners?

The natural progression of Hate leads to “death to my enemies.”

Divisions become a sliding scale where walk outs are welcome and death is negotiable.  Hate always becomes a black hole.  It is a negative space. It is hopefully not the final frontier.   It is a mindset leads to a lowering of the threshold for holocausts and eugenics.

Hate is a lousy drug.  Get the t-shirt.  Stay for the punch.

“So let's leave it alone 'cause we can't see eye to eyeThere ain't no good guy, there ain't no bad guyThere's only you and me and we just disagree”