The Only Devils in this World 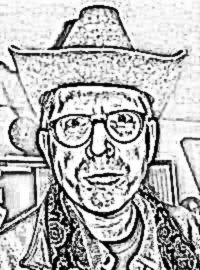 
"The Only Devils in this World are those running around inside our own hearts, and that is where all our battles should be fought." -Mahatma Ghandi
Three weeks after having my heart attack, I was waiting in a small closet sized room in St. Paul's hospital in June wearing one of those hospital gowns that leave you feeling cold and vulnerable from the draft coming in the back of the gown. I was waiting for someone to tell me what happened next.
Just before seven in the morning I arrived and was given an injection of a radioactive dye, so that they could determine the extent of damage to my heart from the heart attack.
I was told to go out to eat a small meal, and come back in about an hour or so. After my return, I lay down on a table, while a great white machine hovered over my head. My body was transported back and forth under the machine, while it performed its medical magic. For as much as I was aware, it could have been a shaman holding his hands over my body chanting and waving a smoking brush.
Next I was waiting in a closet sized room prior to undergoing the actual stress test, which involves being hooked up to electrodes attached on your chest, then running on a treadmill, until your heart rate reaches what the technicians deem to be a satisfactory result. Or you collapse and they rush you to emergency. At least that is what goes on in your mind.
Two nurses, a male nurse from South Asia, and a female nurse from Germany, bartered over who would do the honors of shaving my chest hairs to attach the electrodes. The female nurse won the bet. She entered the curtained room and asked me to drop my robe, so that she may shave parts of my chest. Using a disposable Bic, she dry shaved a few patches and attached the sticky pads of the monitors. I said to her that I was a bit nervous about taking the test since I had my heart attack only about three weeks prior.
She said, "You cannot worry. That is why you had the heart attack. You have to learn to let go, and to go with the flow. I can see you are too young to have had this heart attack. You have had a little temper tantrum in your heart. Now you must learn to not worry, to relax, and just go with the flow."
It is amazing the messages that angels send to us, and surely, I was receiving one at that moment. There were devils running around in my heart, having temper tantrums, acting like the nihilistic spoiled inner child they were. Anything just to get a little attention. Except this time, the teenage wasteland, the punkrock deathwish had gone too far.
She ushered me out of the closet into the exercise room, and I began the treadmill test for another cardiac nurse. About 5 minutes into the exercise, I started to feel faint, so when asked if I wanted to stop the test, I said yes. What happened next I would not wish on my worst enemy.
Because I had not been able to physically finish the test, I had to be injected with another chemical to artificially induce my heart to reach certain rates. Who doesn't love being injected with unknown drugs? I'm joking, but at that moment did not really have much of a choice, or at least the possibility of saying no did not enter my lexicon.
What happens next was worse than having a heart attack, at least for me. I felt tightness in my chest,and the sensation of someone kicking me hard again and again in the stomach. At the same time, my head felt like it was about to explode. It was a Jack Bauer moment, and all I had in the way of relief was the ticking clock. Just three minutes and we will give you the antidote.
Groaning and swearing and no going with the flow ensued. Just one minute and we will give you antidote. AAAAAAAH! JUST TWENTY SECONDS AND I WILL GIVE YOU THE ANTIDOTE. IT WILL REACT VERY FAST, AND YOU WILL BE BACK TO NORMAL.
Except I didn't feel back to normal. And then she said, you can have a break now. Go and have yourself a coffee, and I guarantee you will feel better.
Well, I had that coffee, and I followed it with a non-cardiac breakfast of chorizo sausage and eggs. I definitely went with that flow.
Ten days later I was given the good news by my cardiologist that I was lucky, as the tests showed that my heart had good flow, and no significant damage from the acute myocardial infarction I had suffered.
The devils in my heart were not running my world that day. And the way to keep them from running, was to follow the advice of that small Germanic nurse, who told me to let go, and go with the flow.
Posted by Dennis Mills at 11:39 PM 1 comments
Posted by dense milt at 12:27 AM