In Hell All Devils Are Equal 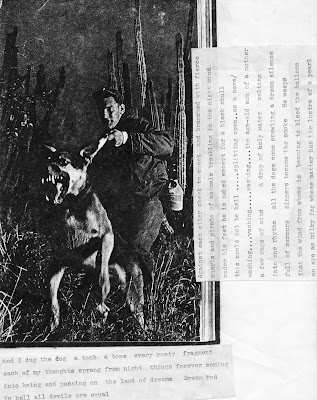 Against each other
Cheek to cheek
and branched with fierce snarls
A pirate of animals trembling
in the night wind
Under his feet he is naked
except for a black skull
This could not be hell......
Splitting open..as cave/washing.....washing.....washing.....the age-old son of a mother
A few rags of mind a drop of holy water melting into one rhythm
All the dogs come crawling
A dream silence full of murmurs
Sinners become the smoke
He weeps that the wind
from above is beaming
to bleed the balloon
An eye as milky fog whose matter has the lustre of a pearl
And he dug the dog a tomb
a bone every rusty fragment
each of my thoughts sprang from night
Things forever coming into being and passing on the land of dreams
A dream red backwards....................In hell all devils are equal.dense milt circa 1979/80 from the archives
Posted by dense milt at 12:45 AM