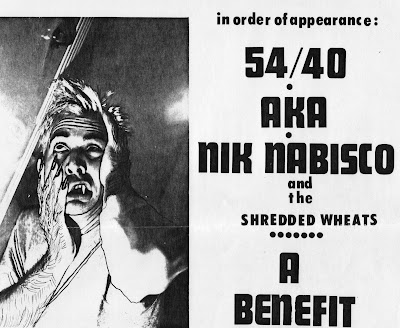 And so begins the story children of how Dense Milt almost made it onto the Vancouver Complication album, an historical musical project that included most of the first wave of punk and new wave bands of the day, including bands like DOA, The Subhumans, Tim Ray & AV, Active Dog, and the K-Tels ( who became the Young Canadians).


My first band was a group called AKA; we were part of the second wave by my accounts, but chronologically we almost made it. The real reason for our exclusion may have been a puffy coat.
One of the bands featured on the Vancouver Complicaton was The Exxotone, who presented two songs Big Shot, and Sideways. Their lineup was Randy Pandora- vocals, Reed Eurchuck - keyboards, Warren Hunter- bass, and Warren Ash on the drums.
If my dates are correct, I had seen this band when they were going by the name The Detectives in the summer of 1978 at the Windmill, which was one of the first clubs for punk rock in Vancouver. The two Warrens- Ash and Hunter, were to later join me in AKA, along with Alex Varty after being "let go" from the Exxotone, who quickly thereafter disintegrated.


We jokingly called ourselves the "Rejectives" for a few practices in Alex's basement. You will soon find out why.

I had found Alex through an ad he made up and posted at Quintessence Records, which was the hive for the emerging punk/new wave scene in Vancouver. We would go there to get the latest import singles, pick up the latest copy of Snotrag, and read the Musicians Wanted boards. This was how many of the early bands got together. Alex listed about a hundred different bands that he considered essential, and a good portion of these bands were also bands that I liked, so I called him up and invited myself over. There I was to meet the two Warrens.


When I saw the Exxotone at the Windmill, I was immediatedly captivated by the drummer, Warren Ash. Randy Pandora was the charismatic lead singer, but he was nowhere as interesting as Warren, who looked possessed. Randy had been singing previously with The Generators, an art-punk band that included Gary Bourgeous on guitar, Michael Wonderful on Keyboards, Gary's wife to be Gina Daniels on keyboards and blender, and Brock Smith ( who played with Tim Ray and the original AV). Randy got together with Reed to work on songs after leaving the Generators, and they found the two Warrens from Deep Cove, one of Vancouver's most intense and interesting rhythm sections.


It is interesting to note that the majority of the Vancouver scene had come from the many suburbs of Vancouver, including North Vancouver, White Rock/Surrey and Burnaby. As the scene developed in 1978, the exodus began, and the first wave of punks started playing gigs at different halls in town (Japanese Hall, Oddfellow's Hall, Cambrian Hall, Russian Hall). The Windmill was one of the first actual clubs that booked punk bands,having nothing to lose. It was a run down grubby little club on Granville street, but we called it home for a few shows.

Warren was up on stage, and he was wearing these glasses he had manufactured out of plastic forks and black electric tubing and a rubber band. Talk about DIY. He looked fierce, and in those days, would play the drums with such force, that he would be unable to open his hands for at least a half an hour after each show.
I'm not sure where I met Reed, but he was an intense guy who lived in the house next to the infamous Gore Street Squat, home of DOA's Joey Shithead. What many people do not know, is that before Reed started working with Randy, he and I had gotten together to try to write some songs.


We met up on a cold night as I was living in Richmond, a suburb of Vancouver, at the time with my parents. Before leaving Richmond for Vancouver, I borrowed my dad's blue puffy coat (you know, the down-filled ones that make you look like the Michellin Man). It was super cold and I hate being cold. Now it was obvious that the puffy coat was totally uncool, and that any self-respecting aspiring punk rocker would have on a threadbare cloth jacket despite the weather.


But it was freezing, and I didn't care about cool. I got down to Reed's,and we jammed on a few songs, one which later became the song Sideways on the Complication album. In our jams, we were using the lyrics from my song Mental Timebombs, which later appeared in completely different and more appropriate musical setting on the Red Therapy lp for AKA. You can listen to it by clicking on the ReverbNation icon to the left.

The evening ended and we both mouthed something about maybe getting together again, but well.....we didn't. But I believe things all happen for a reason, and only a few months later, I was jamming with the Two Warrens along with Alex. Later Randy Pandora even played with AKA for a few shows, and we wrote some songs together.

And so all's well that ends well, but in my opinion, I missed my chance to be on the Vancouver Complication album all for the love of a puffy coat. I'll never know the truth, but I do know that later that same night at the Windmill, I ended up hanging out with Gary Useless, bass player for the Subhumans. We called him Nature Punk, and not just because he had the green hair.

We left with some girls after the show, and ended up on Cypress Mountain looking down on the lights of Vancouver feeling like we were kings of the world. Later all 4 or 5 of us crashed in a one bedroom apartment in Kitsilano for the few hours left of the night. We found other ways to keep warm so that I didn't need the puffy coat.
Monday, November 26, 2007
Bennies, Goofies and Phenos-those were the days
Since man first tasted the apple left fermenting on the ground,
we have searched for ways to improve upon the reality we were given. From Java's jump and jive to Harry the Hipster telling us about putting benzedrine in Mrs. Murphy's ovaltine ,we make our choices, cuz it's all a cup of poison for the asking. I know it, you know it, we all goddam know it, and yet, we can't deny the pull to find new wool to pull over the sight for sore eyes.
Sleep has become the new drug of choice for those over the age of consent. Our world has gone mad with multi-tasking through the many modern distractions; now we find ourselves fuelled by our own internal hormonal chemistry sets, who knew gravity could pull so hard?
Even sleep has been given its own drugs to enhance and enable the experience. Who can forget
"Take Sominex at night....and sleep...sleep ...sleep." It sounded so wonderful, even to a small boy in the sixties.....to sleep, sleep, sleep. Perchance to Dream of a little Persian man on the Magic Carpet (was he a genie or did he have a genie?).
I know I Dreamt of Jeannie. Who could turn away from a half dressed Barbara Eden running around in silky pyjamas all day long blinking her eyes and folding her arms, saying yes, master.
From crosswords to cupcakes to dusty lp collections in Dad's Polynesian Rec-Room, we seek out soft-serve novelties and neologisms to help keep us from dealing with the devil we know.
Does it matter if we call it a god-shaped hole, or get all Christopher Hitchens, and call it by another "other", we are left with the void that is left when we take time to be with ourselves. Why are people so obsessed with keeping busy and working their fingers to the bone? We have lost the knowledge of how to be our own best friend.
First, you have to listen, and be open. This is a frightening proposition for most of us, and we will find anything and everything we can to distract ourselves.
My new puppy cannot stop herself from chewing, doesn't matter what, must chew, must find something new to chew, must go back to what she was told only yesterday or five minutes ago NOT TO CHEW, and chew, lick, nibble, and gnaw.
Consider it part of our 'oral tradition'; the story started with boobs and babes in diapers, and it looks like it ends that way too.
Posted by Dennis Mills at 9:09 AM 0 comments
Posted by dense milt at 12:55 AM