Of Rain, The Park, and Other Things 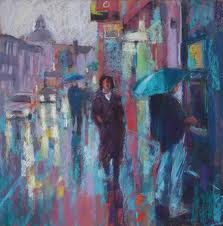 
an old recipe for rain.


increasing the likelihood of murder.


In the commons, muted screams.

Traffic builds over the course of the week,
whittling time, whetstones, misunderstandings.
Now the likelihood increases:
Who is watching the children?

Widows peek through pulled curtains.
By gosh, galoshes and slickers
As far as the eyes see.
This forecast underwhelms and delivers an overcast pall.
"Is it over yet, she says as
the wetness between her legs increases.
By Saturday, after five days of weekdays,
Well, the effect can be dramatic. 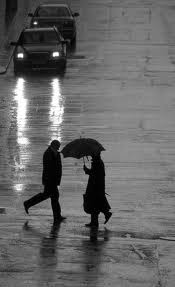 There is now a 22% higher chance of rain
on Saturdays than on Mondays.
Call this the "urban heat island effect"
Warming sidewalks, moist nights
chalk "I love you's" wash away
blurring the focus, increasing the risks.


The awnings are alarming, the storm is warning,
The globe is warming while
Poodles in puddles stop to sniff the wind:
They sense 0.6 °C  to 5.6 °C above
the surrounding suburbs and rural areas. 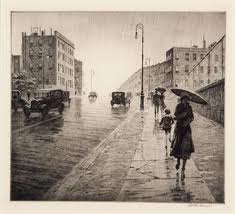 This extra heat leads to
greater upward mobility,
prompting induced labor,
Baby showers, trickle down economics and extracurricular activities.
Bunker down.  Head under the sheets,
An unfortunate incident occurs:
A cat escapes criticism
and  a baby gets thrown out with the bathwater!