No Beast So Fierce 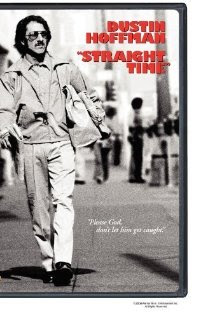 I watched Straight Time last night, a movie from the late 70's starring Dustin Hoffman, Theresa Russell ( her second movie), Harry Dean Stanton, Gary Busey, Kathy Bates and  M. Emmett Walsh.
This film is based on the book No Beast So Fierce, written by outsider Edward Bunker, ( Bunker has a cameo in the movie).  Hoffman apparently wanted to direct this filmn as well as act, but  decided during the shoot that his temperment was better served on the other side of the camera.  He brought in his friend Ulu Brosgard ( who directed The Subject was Roses on Broadway and on film with the great Jack Albertson) to direct.
Straight Time is the story of Max Dembo (Edward Bunker), who was a real criminal who spent most of his life in prison, but recounts one of the times he was "free."
Freedom is a strange concept for someone in prison, as the career prisoner often finds life in prison more comfortable than life outside.  Comfort comes from community.  I once asked a family member who was living on the streets how they could live down there, saying it that way, down there like some kind of hell on earth.  Their answer was that it was the only place where they felt community, where they felt they could live without judgement of who and what they were.   I know a lot of that was the drugs talking, but there was also a truth that resonated.  One of the so called pillars that needs to be respected when we try to 'fix' the drug problem is providing community.
We watch the scene in the visiting room at the LA County Jail when Theresa Russell comes to see Dustin Hoffman, who did not show up for their date, as M. Emmett Walsh busts him back to jail on the unproven assumption that he is using. This scene is a master class in acting.  His eyes won't look at her straight; they can't as his emotions are balled up inside him like a caged animal.  His face is the face of rage, anger, but it is all internal.   He is the lifetime criminal, the guy more used to life on the inside.  You can also sense that he doesn't want her to get too close, knowing that she risks more than her innocence being with him.  M. Emmett Walsh is  Frank,  the parole officer, a corrupt porcine oaf who holds the keys to the handcuffs and Hoffman's freedom.  All I'm going to say here is that you will enjoy his comeuppance on the highway.  It is a scene that will burn forever in your head.
We also get to see very young Gary Busey ( pre motorcycle crash), Kathy Bates (pre weight), and Harry Dean Stanton, who always has had that face, that hangdog loser face.  His character is a perfect companion to the John Cazale character in Dog Day Afternoon.  Sal you can go to any country in the world, where do you want to go?  Is Wyoming a country?
Dustin Hoffman meets up with the character played by the film's real life author Edward Bunker in a bar.  Bunker's forehead, greasy hair and 70's moustache is as brilliant casting as Hoffman's fish out of water jitters. 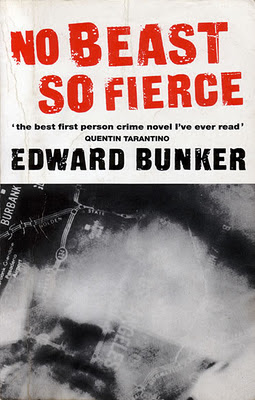 Straight Time is based on Bunker's first person account of life on the inside and outside of prison No Beast so Fierce.  As the cover to the left proclaims Quentin Tarantino call this book "The best first person crime novel I've every read".
Bunker enjoyed some fame  after getting out of prison as a writer and actor- he played Mr. Blue in Resevoir Dogs.  His book Animal Factory was also made into a movie, with Willem Dafoe and Edward Furlong.  This is the real hard-boiled stuff.
Interesting that they change the name of the  movie to Straight Time.  As I was googling Straight Time, I forgot the title for a second and typed in Straight Life.
I got the schmaltzy Bobby Goldsboro song ( Leaving the straight life behind, I'm just playing a game in my mind ), and hardcore heroin memoir The Straight Life by the jazz great Art Pepper.
Pepper's autobiography is one of the best autobiographies that I have read.  When he talks about how he felt shooting up for the first time, you can actually understand how that lifesyle would have the attraction it does.
Most people do not fall into the down and out lifestyle of an addict for kicks; dope is not the gateway drug to injecting heroin.   Pain is the gateway drug to heroin.  Abuse is the gateway drug to heroin.  Being raped by family members you trust can be the gateway drug.  No, Pepper spells out his life story of pain and tragedies that bring a person to heroin.  When he describes in detail the pain, and then how for the first time in his life, he did not feel pain, he did not feel anything, and the absence was such a relief from a lifetime of hurt, it doesn't make you want to go out and score.  But it does gives us empathy for what drives people to addiction, to practices that can kill themselves a little bit everyday.  It does what the film Straight Time does: it shows us how some people who cannot fit into our society do not feel comfort in this society.  For the addict and the hard core criminal,  the concept of being out, or Straight Time,  or living the Straight Life is a  false dream that doesn't fit the cards they have been dealt.
I am reminded here of a person I will not name who was very close to me.   She was an alcoholic, which is a label we give to people who prefer the company of a bottle.  Her alcoholism did not define her, but her alcoholism killed her.    Contrary to the opinions of some people very close to me, it was not her moral failure or lack of control or her inability to say no to a drink that put the metaphoric gun in her hand.    It was the demons inside that grew from a world of deep pain and hurt, that come from an abuse of trust of some kind, the kind of abuse that drives a person to feel they are worthless, to devalue their life, to seek the solace in something to kill the pain.
In the end, the pain is killed, but so is the patient.  We hope  their peace in death provides a comfort that they could not enjoy in life.   But every death marks those left behind, and we are left to grapple with the unanswered questions to what we perceive as an unfinished life.
Posted by dense milt at 1:29 PM