I Began Walking At Age Six 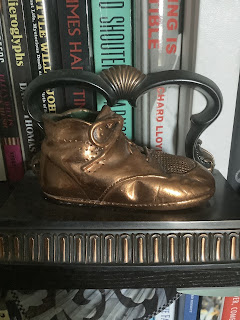 After years of standing upright and moving my legs, I began walking at the age of six. Of course I could crawl with the best of them. My pratfalls were legendary, once falling down a concrete stairwell and losing my front baby tooth. Later at age eight, I zigged when I should have zagged, and Brie off half of the same adult front tooth, resulting with a silver cap.  This led to much teasing from older brothers, who when I go braces, nicknamed me Metal Mouth.   Careful! Don’t go out in the lightning storm.  Lightning  will surely strike you in the metal mouth electrocuting you.  But I digress, as we were speaking of walking.

But when I say I began walking, I mean this in much more than a physical sense.  I embraced the full meaning of walking, where a walk is not just an exercise of the legs and feet, but an escape, offering a directionless expansion of the mind.  When we walk, truly walk, we are open to the senses around us. But we also open to the senses within.

I have always thought that I was ruminating, which I thought meant luxuriating in thought.  Lost in that room of my own, my own mind.  In reality, the meaning of the word ruminate is to obsess or brood on repetitive negative thoughts.  I had walks like that too, but more often, the walking was a process of letting my thoughts wash over me. Kinda like raining on your own parade.

I remember at age six, trudging down a steep snowy hill, the snow as high as half my body. I was bundled up and pushed out the door, alone, in the general direction of the school.  As I walked, my mind wandered. Ideas came to me, and I made up songs in my head.   I have no memory today of any of these songs or what they were about. I would think about home, about my older brothers, my younger sisters, the horrible black cat we had inherited from family friends who moved away. They had  left him with us for safekeeping.  I never asked for a cat, in fact like my mother and her intense dislike of all things melon, cats were anathema to me.

Besides walking, I would visit friends, go to birthday parties, and compete for playground popularity by bringing Miss May, from a Playboy calendar belonging to one of older brothers.  I got into much trouble for disseminating this blonde beauty, bringing shame to my mother from my third grade battle axe teacher.  Somehow that fact that so had stolen this from my older brother was never a consideration.

I had a friend name Kevin, whose family was Catholic.  They had more kids that even our family, as we had seven, and they had over ten.  Due to all the kids, their house which was next door, smelled like urine and honey.

I also had a friend named Alan, a weird kid who chewed pencils, and ate the paste that the janitors supposedly made from horses.  Alan had a collection of giant gallon glass jars under his bed filled with, you guessed it, more urine.  There were over 10 large jars under his bed, which was one of the earliest examples of bizarre collector mentality.

I remember one birthday party that resulted in a fire in the kitchen, flames rising up the walls, before my friends parents managed to put it out.  Another birthday party was my friend Johnny Mercer, who sported a jacket and turtle neck, and was the first boy/ girl birthday party.  He played The Beatles Rubber Soul, and kids danced.

Montana was a strange place of snow, blue skies, a trip in a land rover that resulted in turning around on a mountain road that had ended somewhere up the mountain. I remember looking out the window at the cliff below us, thinking that today ai would die.

I also remember great violence, as one brother joined the Air Force to avoid the draft, one brother was assaulted in a parking lot at the mill he worked at, his back slashed with a razor requiring hundreds of stitches, my Father assaulted in the same parking by a guy he had fired, who holding a piece of metal in his fist proceeded to break my Father’s jaw, causing his to earth from a straw for months with his jaw wired shut.  Another brother had bought a beautiful sky blue Chevy Malibu SS, and drove off a cliff, totalling the car.  He was banged up but thankfully survived.

From the snowy hills of Montana, one day I learned we were moving to the wet, grey and always dying small town of Aberdeen in Washington, or Warshington as we called it.   Aberdeen was the future home of Kurt Cobain, and at one time in the 1920's was a logging boom town with 5 times the population that lived there when we arrived.  Aberdeen is also famous as the home of the Grays Harbor Ghoul, Billy Gohl, aka Billy Montana, who supposedly killed between 2 and 100 people.  I say supposedly as he was a Union official, who may have been framed by influential local businessmen in the docks and timber industry.

How small was the town? If I walked from our house to the right, it would take me across a bridge, and through a section of town where there were large houses.  My friend Jeffrey lived there.  His dad was a DJ on the radio, which meant that even though the house was large, they were relatively poor.   Another friend named Guy Morton lived there.  Guy was an overweight kid, who was bullied by other kids, who would grab his boy tits, and twist them for laughs and humiliation.  This maneuver became known in this town as a Purple Morton.

At some point in an easterly direction, you would come to a  Chinese owned grocery store, where my next younger sister spent my prized buffalo Indian head nickel. I had not given it to her to spend, as it was part of my paltry collection of coins of little distinction.  Then one came to another  hill with an easy grade that went to the downtown area of shops and the theatre.  In the summer, young boys would race their family made creations in the Boy Scouts Soapbox Derby.

I remember one summer, my mother bought me a pass of ten movies.  I could lie and say it was all about my early film education, but really, she probably owanted some time to herself.  I walked to movies like The Seven Faces of Dr. Lao, That Darn Cat, Herbie the Love Bug, The Parent Trap, and every movie ever made by Hayley Mills.  As Mills was also my last name, I dreamed that she was my distant cousin, but I don’t think we  were related in any way.

I remember one day crossing the bridge and an older kid stopped me. He pulled a knife and told me to give him my money.  "My money" in those days was usually just some coins I had in my pocket to buy candy, and was definitely less than a couple dollars.  I was terrified, but could also see that the older kid was scared as well.  Even though he was the one who was threatening me.  Somehow I felt both pity, sympathy and fear.

My daily walk to school was down Scammel Street, a very steep hill. Unlike Montana, it was paved, and had a sidewalk. But it was incredibly steep. The school was at the bottom of the hill.  For most of the year, it would rain, massive amounts of rain, and the rain would flow down and often flood the Flats where the school was.  Houses down there were little smaller, and more rundown than our neighbourhood, which was higher up on the hill.

In Aberdeen, wealth was distributed according to the altitude of where your house was.  The higher on the hill, the richer the family. Down lower on the flats, the houses were more rundown.  Up near the top of the hill was where the streets ended and the forest began.  We spent many a day in those woods, coming home only as dusk approached. My mother would send us out saying only to be home for dinner.  With seven kids, just getting a few out of the house was probably essential for her sanity.

As I grew up, walking became more than a solitary endeavour. It became something I would do with my best friends.  In junior high school, we moved to Portland, and my friend Doug and I would walk all over the  suburb, past the boundaries of our subdivision to the very edges of civilization and on to the big pond.

Doug would say Wanna go down to the pond? Wanna?

There were ducks, and giant bullfrogs, snakes and mud.  Lots of mud.  Doug had guns.  His Dad was military.  My mother never allowed us to have guns, although my older brothers did have a rusty air pumped BB gun rifle.  My mother hated it, and forbid me to play with it, which only made it more attractive.

But Doug had real guns, and we would take his gun to the Pond, and shoot the bullfrogs.  That probably sounds horrible in the context of today, but as teens growing up in the suburbs, we had very few rules, other than don’t get caught.

And we would set off with his shaggy dog, Harry for our walks.  Harry was a great dog, always getting into things.  We would see a garter snake on Doug’s front lawn, and go Harry! Snake!  Harry! Snake! Get the snake.

And he would grab the snake in his mouth and shake it until the poor snake became two halves, each crawling in opposite directions, until it died.

In grade ten, we moved back to Canada, and I spent a year as an outcast in the conservative town of West Vancouver.  My self-esteem was so low, that when a kid called me Derek all year long, I never corrected him.  After all, at least he was talking to me!

One of my favourite stories came from this year.  I was in an English class, taught by a German lady. She was writing on the blackboard the intricacies of grammar, and the boys next to me picked up a small desk, and were able to throw it out the window, where it crashed 5 stories below in a courtyard. The teacher didn’t even notice it.

But the teacher in the room below ours noticed.  He was not so affectionately called Mr. Bonehead.  He burst into our classroom and demanded that the teacher explain to him what had just happened and who was responsible.

The teacher turned to the class and said to me, Dennis, did you see a desk go out the window?

I was not going to snitch on my classmates, because if I had, the ostracism would have been unbearable.

I said to her, No, I didn’t see a desk go out the window.

Well, there you have it, she said to Mr. Bonehead.  Obviously no desk went out the window.

You could almost see the smoke coming out of his ears.

He turned and furiously slammed the door behind him.

I always loved the simplicity of the argument.  Desk? Did you see a desk fly out the window? No!

I have to give Mr. Bonehead credit for teaching us that the story of history is told by those with the money.  Follow the money, he wisely instructed.  Years later he was fired for incompetence.  I kind of felt bad about that.