“Since then, TV and the malls and the drugs have annually compounded the Big Stupid we live with now.” 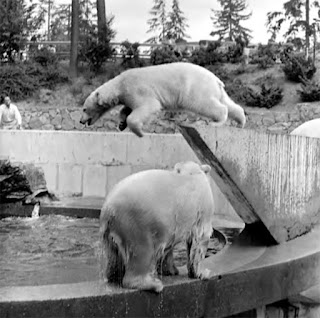 Last night I had a strange dream where I was riding in a Cadillac with my friend Darryl, and my friend Steve Taylor.  Darryl wanted a beer, so we stopped near the casino in Richmond.  Instead of going into the casino, Steve started running in the opposite direction.  Now Steve and I have been friends since the Eighties, but I have never seen him run before.  We were now on a trail, and Steve was far ahead.  I called to Darryl, who was also ahead of me, to slow down.

Then I came upon a large hole in the ground, barely covered with sticks and branches, a hole that was more like a trap.  Darrell called to warn me to watch out for the trap.  We then made it through a couple narrow passages where there were large rectangular blocks of stone, and a baby black bear emerged.  It was small, and cute, but I knew that Mama or Papa bear was not far away.

I realized then that the previous trap was for the Mama bear.  At that point I awoke, and remarked on the dream, where the discovery of the bear put foreshadowed the revelation of the baby bear.

I did my exercises and made some breakfast, avocado on toasted spelt bread with some Boursin, and another piece of toast with Michelle’s grapefruit marmalade with Bourbon.

I was reading an article on Steely Dan, and Donald Fagen’s memoir, Eminent Hipsters.  He talked about his influence of a radio DJ named Mort Fega.

Fagen recalls “pulling the radio under the covers, in order to escape my parents’ wrath. […] I’d usually drift off before the closing theme.”

This prompted a memory of mine of living in Aberdeen Washington in the Sixties, listening on my transistor radio under the covers to late night talk radio KGO with Ira Blue.

He had an unusual voice for a radio broadcaster, nasal and with a New York City accent similar to that of Howard Cosell. Like Cosell's, Blue's unconventional voice had a riveting quality to it.

KGO was from San Francisco, and I marveled at how I could listen to them two states away in sleepy little Aberdeen.

Probably because of the dream earlier with the black bears, I started thinking about the polar bears that used to live in the Stanley Park Zoo.

These beautiful wild animals always looked so sad and out of place.  They were slow, lethargic, and aroused more pity than fear.

Scout Magazine notes “The story of the zoo dates back to 1888, the year Stanley Park officially opened. Henry Avison, the city’s first Park Superintendent, captured a baby black bear on the grounds and chained it to a stump, thus beginning a 108-year tradition of the park’s display of wild animals.

The large concrete polar bear grotto was built in 1962 and quickly became the main attraction for park-goers. The four bears – Nootka, Jubilee II, Prince Rupert, and Princess Rupert – were born on Southampton Island in Hudson’s Bay, and were donated to the zoo by the Hudson’s Bay Company. 1962 also saw the arrival of Tuk, the bear who is fondly remembered for once “rescuing” a kitten that had been thrown into the exhibit. “

The zoo closed in 1996, when my daughter was three.  The last animal to leave was Tuk, the polar bear.  Due to its poor health, they kept him there until he died.

On our last visit to the zoo, all we saw was a very mangy squirrel with a half eaten tail.

Music listened to this morning: