The Radical Search for the Gooey Center, or Honey, I Shrank the Badger, or Billy Pilgrim's Progress 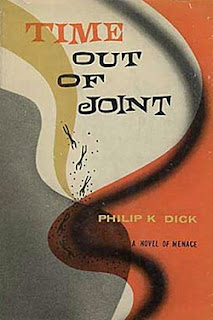 Nostalgia isn't what it used to be.  We yearn for a time that is past and gone. Perhaps, it never was.  If you are confused now, just wait.  We ask that you keep up, and just get with the program. As a teacher once scolded me and some friends who were trying to change the course of simulated history, "don't ruin it for all the other kids."

As a young man, I was consumed with Philip K. Dick and his worlds of shifting realities.  Just because you're paranoid doesn't mean someone isn't out to get you.

But paranoias were simpler then.  The paranoia virus had not yet mutated, into our "modern" variants and conspiracy theories, and alternate realities.   Dick's writing, fueled on amphetamines and poverty, presented a world of nebbish characters, who would slowly find out that the world they thought they knew, was not in fact the real world at all.  Little by little, the world would start to degrade, the ground would begin to melt, and chaos, as funny as he depicted it, would begin to swallow these characters whole.  While his characters were not consciously unreliable narrators,  they began to doubt the reality of their own experiences.  They began to lose trust in their cognitive ability to discern what was real and what was not.

"Tomorrow, and tomorrow, and tomorrow,
Creeps in this petty pace from day to day,
To the last syllable of recorded time;
And all our yesterdays have lighted fools
The way to dusty death. Out, out, brief candle!
Life's but a walking shadow, a poor player,
That struts and frets his hour upon the stage,
And then is heard no more. It is a tale
Told by an idiot, full of sound and fury,
Signifying nothing."  Shakespeare

Or in the words of David Bowie, "Where the fuck did  Monday go?"

As we enter year two of the pandemic Covideodrome 19, remember the dangers of early adopting technology.  Witness James Woods in the Cronenberg movie Videodrome.

Now that's got to hurt.

Billy Pilgrim has become unstuck in time.  We are told that becoming unstuck is analogous to living from moment to moment.  Only the moments are not chronological.  Logic is thrown out the window with the baby and the bathwater.  To the man on the street who looks up, and says in disgust, "More babies, more bathwater."

Come on, a nice hot bath will sort you out.  Except after a year of soaking, your skin is so porous, you can barely keep your soft gooey center  from filling the tub.

Next week, we get Groundhog Day.   Will Punxsutawney Phil, the world's oldest rodent,  see his shadow, and there will be seven more years of pandemic?   Are there more Punx named Phil than there were Lassies?  The Old Farmer's Almanac instructs us in how the groundhog fit into this ancient festival.  Historically, a groundhog wasn’t the animal of choice: a bear brought the forecast to the people of France and England, while those in Germany looked to a badger for a sign.  Perhaps a honey badger would be a better mascot for 2021.

Speaking of honey badger, doesn't that sound like a comfort food of the week?   An unfortunate side effect of all this staying inside is Instagram food photography.

Too many food selfies that look like someone got sick, and now it's boiling.

HONEY BADGER (Wuhan Style)  (recipe not available at this time)

Please note: Badger is not easy to find at your local supermarket.  There are butchers who specialize in game.  And finding a badger, and covering them in honey is a game not to be taken lightly.   Personal Protective Equipment is necessary.  I dare say, you may want to vaccinate before even attempting it.