LIFE CAN GET MESSY AND THAT'S OK 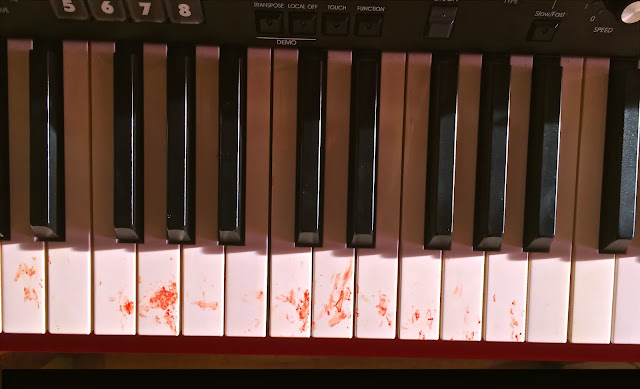 "The Nervous Light of Sunday: The pain was excruciatingly vivid, and for many moments I was terrified by the fear of death.  Illogically, this was one terror I believed I had long since cast off - having cast it off, I thought, with the effortless lunacy of a man putting a shotgun into his mouth and ridding himself of the back of his skull. That the fear of death still owns me is, in its own way, a beginning."  Frederick Exley A Fan's Notes 1968.

Today is the Ten Year Anniversary of a pivotal moment in a life of many moments, the day of my "myocardial infarction", which sounds like a faux pas made at a party, a small mistake, I guess I misspoke, it was a failure to communicate, a mere something that could be excused later with an apology to the hostess the morning after.  "Myocardial infarction (MI), commonly known as a heart attack, occurs when blood flow stops to a part of the heart causing damage to the heart muscle. The most common symptom is chest pain or discomfort which may travel into the shoulder, arm, back, neck, or jaw. Often it is in the center or left side of the chest and lasts for more than a few minutes. The discomfort may occasionally feel like heartburn. Other symptoms may include shortness of breath, nausea, feeling faint, a cold sweat, or feeling tired. Wikipedia"


Today is the Ten Year Anniversary of a heart attack that changed everything.  "After an MI, lifestyle modifications, along with long term treatment with aspirin, beta blockers, and statins, are typically recommended."

Time is a strange concept, the meaning of which has been debated for centuries.
As best as I can summarize, time is an inexact measurement of experience and memory.

Much has transpired in those ten years.  Winners.  Losers.  Changes.  Many friends and family are gone, some through death, others through attrition.    Babies were born.  Jobs were changed, we moved twice, my daughter graduated from high school and soon will graduate from University, friendships have been lost, but then again, many new friends have become a part of my life.

Did I modify my lifestyle, as directed?

Modifications happened, some were planned, and some, just happened.

Ten years ago, I went through the physical rehab, my body got stronger, only to have my mind fall into depression.  This is a very common after effect of an MI, a result of the event, the psychological changes, changes to brain chemicals, brought about from some the beta blockers that were supposed to make me better.  After getting a handle on that, there was an eventual return to a workplace that science fiction come to life.  I experienced a lesson in mindfuckery that will one day have it's story told, but eventually, I had a coming to of the senses resulting in a change of work,  We moved back to the city,  I fought hard to immerse myself back into the creative music scene I had abandoned for anywhere from 3-14 years, helping organize benefit concerts for stricken friends, benefits to bring focus to past creative involvements.

In those ten years, I have experienced the death of some of closest friends, and witnessed the dementia of my mother and eldest brother.  Dementia is a cruel distortion of time,  a living death sentence that lasted until their final moments on this astral plane,  a year apart from each other.

I am nearing sixty.  As we age, death starts to surround us.  The water gets higher, the bodies float by, but still your head is above water.  People die from all sorts of things, heart attacks, broken hearts, cancer, drugs, broken minds and depression, suicide, and sudden tragic accidents. "That the fear of death still owns me is, in its own way, a beginning."  Death after all, is a part of life, and as such, is not to be feared, but yet, this fear of death can colour everything.

Time is precious, as life can change so fast.  Are we using our time well?  Are we "doing" more or thinking less?  If we think less, do we become thoughtless?  If you "think" more than you "do", the mind starts to play tricks. One can lose track of the bigger picture, and become mired in the details of mounting anxieties.  Worries rarely hold up to scrutiny, under closer inspection or reflection, they disappear.

Regrets, I've had a few, but then again, too many to mention here. More importantly, some of my regrets are just too private to mention.  My mother would say if you don't have anything nice to say, don't say anything at all.  If I listened and practiced those words, I would have lived  a monk's existence. My closet is a walk-thru, so I have little room there to stack the skeletons; then again for a small fee, plus one free month,  there is always storage lockers.

Anniversaries are important to acknowledge, but not necessarily to celebrate.  Still, it is important to acknowledge and take stock.  Ten years is a long time, and nothing at all.  Kurt Vonnegut  said, "so it goes."  As long as it still goes,  there is hope.  When there is hope, there is opportunity for new discoveries.  Here is to the next ten years.  May my passions still burn with the intensity of youth.  But if the burning sensation persists, drink more water.  Your kidneys will thank you. 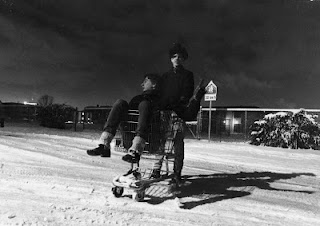 There is something so wonderful and absurd about this photo taken so many years ago by my beautiful wife, Michelle Normoyle.  I'm not sure why it seems right to close on this image, but it does.

Much love,
Dense
Posted by dense milt at 3:12 PM