What we're gonna do right here is go back, way back, back into time.
When the only people that existed were troglodytes...cave men...
cave women...Neanderthal...troglodytes.

Minus nine months:  Life is one of the strange ones, in that it doesn't start at one.   When does life start? People have been debating this one long before Roe v Wade; a twinkle in my dad'e eye, a stirring in his loins, or a hunger in his soul?  Did my mother dream of me and prepare the grounds for planting?  Was it scattered there like drift?  A trace of this and a dash of that.  For whatever reason, the me that is me began either late March or late April of 1957.  In June of 1957 my wife to be was born in Ottawa.  I had some catching up to do.

Zero:  When I began, I was a zero.  An open mouth screaming.  Apparently I was a month overdue. That is what I remember my mother saying at one point.  She can no longer verify this statement, as died and had dementia for many years before her death.  But right from the start I felt the need for attention.  I was waiting for the moment I could make the most impact by delaying the big day.  Timing- it is all a question of timing.  Like the drummer's description of the singer- How do you know a singer is at the door?  They don't know when to come in and they can't find the key.  A shard from a song I wrote Gods and Killers: "Right from the start broke a piece off his heart, just a little flack from his little mommy's sac, Life wasn't his bag."

15 months: The novelty has worn off.  The baby is boring.  My mother opens the door to her station wagon and welcomes another hitchhiking fetus, who will be my little sister.  My days as the baby of the family are numbered.  Roughly speaking there were 270 of them.  You hold the baby.  No, you hold the baby.  Can I get a bottle?  Who is minding the bar here?

Two: We move from Burnaby to North Vancouver.  I am no longer the youngest child.  My first actual memory happens at two when I fell head over heels for my new sister, down a concrete stairwell, losing my left front tooth in the process.  OUCH! What a kid will do for attention.

Three:  I have no memory from age three so I can only assume that this is either my first dissociative state or when the Satanic indoctrination began.  I ran out of the house naked (well who doesn't?) prompting my mother to beat me with abandon.  OK she just spanked me.  Most likely I learned how to use the toilet at this age.  Good boy.

Four:  I punched a kid in the eye.  I felt bad.  I felt good about feeling bad.  I put my hands in wet cement.  We moved from North Vancouver to Port cessation.  Pulp mills, tomato plants, concrete, cousins.... 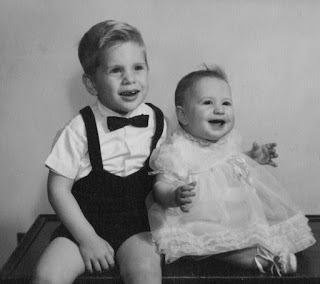 Five:  My youngest sister is born.  I am put up for a few nights with my sister at our aunt and uncle's house in Qualicum Beach.  I reported woke in the night to say to my 2 year old sister, "Let's get out of here, sis."  Uncle and Aunt overhear the escape plan, and my first plot is foiled.  Our family is now made up of Mom and Dad and seven kids, five boys and two girls.  Due to Canada's six child limit, my family is forced to leave Canada, travelling by caravan to Missoula Montana.  Montana is called the Big Sky Country.  We are in the old West.  Arguments are settled with a gun or a razor.  To avoid eye contact,  everyone looks up at the sky.
There were no speed limits in Montana, just tiny white crosses that they planted on the side of the road wherever someone died.  We finally find a family that is larger than our family with the introduction the next door neighbours.  They are Catholics and the last name was Sullivan.  The Sullivan family have nine children and their house smells like honey and urine.  For years I believed that was what Catholics smelled like.  I know better now.
As a January born child, I was held back from school.  Since the only kindergarten in Montana was for Catholics only, I stayed at home with my mom and two sisters.  I still had older brothers and a father, but they had their own fish to fry, their own deer to kill, their own cars to crash, their own wars to fight.   As a Canadian living in America, we were forced to relearn English.  American English.   Creek (rhyming with speak) was now crick ( rhyming with brick).
Roof (like truth) was now roof (like the sound dogs make, or the hoof of a heifer).
For two more years I was allowed to play with my next older brother.  Then one day, unannounced, he became a teenager, and I acquired the affectionate nickname "cowpie."
In Montana, I was introduced to my first pet, Peter the cat.  We inherited Peter from a family named Cunningham who moved away.  Peter was black and white, and vicious.  I hated him.  He would hide in the bushes near our blow up swimming pool, and jump out to attack me when I ran crying to my mother. Two other stories about Peter.
One day my sisters saw a cute Pekinese puppy hanging around the back door where the cat's dish was.  In those days, dogs ran wild, and all animals were kept outdoors.  My sister's made the mistake of encouraging this little dog to come by and eat from our cat's dish.   One day, we are playing inside, and we hear a ferocious fight, cat snarling and dog yelping, whimpering and ran out to discover a lot of dog hair on the lawn, no dog in sight, and Peter walking around like he owned the place.  Because in the law of the west, he did own the place by asserting himself as the biggest pecker in the pecking order.   Peter Pecker pulled no punch, picking on a Pekinese, had Chinese for lunch....
Peter the Cat story two.  Remember we inherited this cat- we never chose to have a cat, and most of us did not want him.  And he was an outdoor cat.  One day he left.  Either tired of rejection, or lured by the promise of more love or tuna, he ran away.   Which should be the end of that story.  Except the cat came back.  About a year later, the cat came back.   I don't remember how we finally "lost" Peter, only that when we next moved, he was no longer with us.   Perhaps my parents were sending us a signal.  Watch your step kids.  There are seven of you.  Who would miss one of you if you were to go missing?
Before we move on literally and in the telling of the story, let me tell you of how my mother decided to quit smoking.  As Canadians, my parents had been required by Canadian law and custom to drink rye whiskey with ginger ale, and to smoke.  Smoke 'em if you got 'em.    One night in Montana, my father was away on business, (he was always away on business - but that is another story), she fell asleep in a chair smoking, and according to her recollection, nearly burned the house down.  As good a cessation excuse as one could come up with on the fly, raising seven kids in the frontier town of Missoula.

Six:  School starts!  My first teacher was Mrs. Lake, a tall woman with horn rimmed glasses.  She was very similar to my Nana (my mother's mother).  As a result of being held back, I was anxious to learn, and was not only a quick learner, but always did well in school.  Everyday I walked to school on my own, as kids did then, down a big hill.  On my way to school, I would sing songs of my own invention, and talk to myself.  To say I had a rich inner life, would be an understatement.
In the winter, the snow drifts would be up to 5 feet high; the word "trudging" was invented.  In elementary school, I would meet many wonderful and strange characters, people who were even stranger than the Catholics next door, and believe it or not, more strange than my own family.
to be continued.......