Relax and Open Your Hellmouth Wide 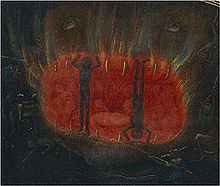 Hellmouth.  Sounds like what you get after a night of hard drinking and smoking cigars.  As in "My mouth tastes like Hellmouth".  Apparently that is not the real definition.  Hellmouth is literally the mouth of hell.  Visions of Rush Limbaugh and Howard Stern run into my head.  The whale-monster Leviathan is also associated with this description.  Recently a song of mine was pronounced "Leviathan with soul".
In The Whale, an Old English poem from the Exeter Book, the mouth of Hell is compared to a whale's mouth, though somewhat indirectly:

The whale has another trick: when he is hungry, he opens his mouth and a sweet smell comes out. The fish are tricked by the smell and they enter into his mouth. Suddenly the whale’s jaws close. Likewise, any man who lets himself be tricked by a sweet smell and led to sin will go into hell, opened by the devil — if he has followed the pleasures of the body and not those of the spirit. When the devil has brought them to hell, he clashes together the jaws, the gates of hell. No one can get out from them, just as no fish can escape from the mouth of the whale.[8]

Satan himself is often shown sitting in Hell eating the damned, but Hellmouth should not be considered to be the mouth of Satan, as the Hellmouth never bites the damned, remaining wide open, ready for more.'
So now we have a Hellmouth wide open and ready for more damned, presumably.  That gnawing hunger or thirst that displaces reason and civility.  What I have colloquially called at times "The God Shaped Hole."  I suppose God has no exclusivity clause on "Shaped Holes". Apparently Satan gets to have one too. 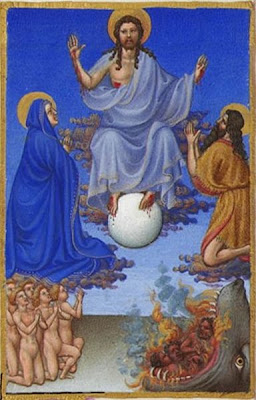 Please note the picture to the left ,which Wikipedia calls Simplified Last Judgement.
Simplified Last Judgement sounds like something you would find in The Rapture for Dummies, a book I recommend, if you can find it.  Given the state of politics in the USA, this book may be out of print.
Note in the picture Jesus is sitting on what looks like either a puff ball or perhaps an egg.  An egg ready to burst, releasing forth a plague of spiders, snakes, vermin, and pestilence.
To his left and right, the supplicants.  On the left is the Virgin Mother, and on the right we have  either Joseph, or John the Baptist, or for all I know, it could be another Occupy protester, hackeysack hidden beneath his robes.
In the bottom left hand corner, we have the naked multitudes.  As my father and mother always told me when I said I wanted to run away from home, well son, you can go, but you will have to go the same way you came.  The threat of public nudity has kept me docile for almost 18 years.
In the right hand corner, we have Hellmouth.  Finally you say, we've been wading through this whole blog post just to get to Hellmouth, or the heart of the matter.  In this picture, Hellmouth is represented as the head of the Leviathan, but looks more like an inner city rat's head than a giant fish. Inside the mouth are the damned, but we must ask why are the damned so nappy,  looking like an album cover from the soundtrack of a 70's blaxploitation film.
Much smoke is coming from from the open wide Hellmouth. Perhaps an allusion to drugs or  all night revelery. According to Wikipedia, "the body of the Leviathan, especially his eyes, possesses great illuminating power. This was the opinion of R. Eliezer, who, in the course of a voyage in company with R. Joshua, explained to the latter, when frightened by the sudden appearance of a brilliant light, that it probably proceeded from the eyes of the Leviathan. He referred his companion to the words of Job:  "By his neesings a light doth shine, and his eyes are like the eyelids of the morning".
Neesings is defined as sneezings or snorts, but more accurately from the old Hebrew, is breathing with difficulty.  Sort of like when my wife sleeps in another room because the sound of my neesings keep up awake all night.
It is revealing that in spite of his supernatural strength,the Leviathan is afraid of a small worm called "kilbit", which clings to the gills of large fish and kills them.

Excuse me, but one of the Seven Princes of Satan is afraid of a worm? And we shall call the worm 'kilbit'???  The irony is rife.
Let us review what we have just learned here.
1. God can't control Satan
2. The Hellmouth must be open wide
3. The whole shooting match can be brought to it's knees by a small worm.
Legends and myths were often stand-ins for unvoiced fears.  Discretion, public decency, bad translations, take your pick.  Allow me to shine a light into the origins of the Hellmouth.


Could it be that the myth of Hellmouth is simply a metaphor for the oldest  male nightmare of the vagina dentata?!?  Can the roots of our religious fundament be boiled down to our primal fear of the "other"?  To our primal need and fear of the Mother?
Allow me to shine a light into the metaphor:


Similar to the Hellmouth, the place from which all life emerges lures the unsuspecting "Rapture for Dummies" with it's sweet smell, drawing us in, tempting us to the pleasures of the flesh, Original Sin, and just when the Devil has you down on your knees, in your most vulnerable moment of weakness, the jaws clamp shut.  You have entered the Hellmouth.


Remember that the whole enchilada can be shut down by a small worm, known as the 'kilbit'.  How's that for a buzz kill?  All things considered, I'll take my risks.
So relax, and open up the Hellmouth wide.   Softly, wipe the sleep from my eyelids of the morning, and call me Leviathan. With soul. 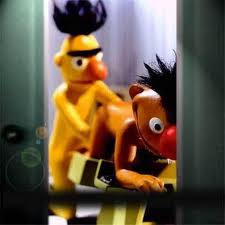