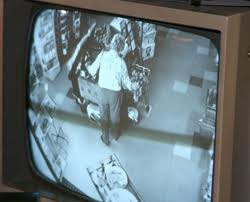 In a recent issue of The New Yorker, author Jenni Diski reviews a book on Shoplifting, and offers her own thoughts on why people steal.
The Thrill? Desperation?  Hysteria? The Wandering Womb?

The general impression may be that shoplifting is a female crime, although this is not born out by statistics.

One in eleven people shoplift. The ages can range from kids in the candy aisle to professional boosters in their golden years. While people of colour are more likely to be questioned, watched or arrested, it is really a faceless, raceless act that encompasses the whole rainbow coalition.
Walmart announced in 2006 that they would not be prosecuting anyone who stole under $25, so they could concentrate on professional boosters.  This is the same company that lobbied for raises in the minimum wage, so their customers would have more money to shop at ...you guessed it: WALMART.   It is also the company most responsible for the outsourcing of jobs to China, the credit imbalance, the death of small town America.  Moving the Grizzlies to Memphis.  (OK, maybe not that one.)
Listen to Jenni Diski: http://www.newyorker.com/online/2011/09/26/110926on_audio_diski


WHO MOVED MY CHEESE? 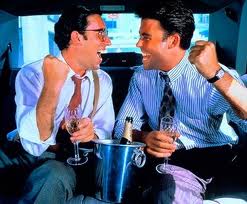 WHERE THE FUCK IS MY PARACHUTE?
or WHY IS THIS GROUND SO FREAKING HARD?


GOLDEN YEARS or GOLDEN SHOWERS?
HEY MADGE, YOU'RE SOAKING IN IT


SO THIS IS WHAT DEPRESSION FEELS LIKE
or
IS IT REALLY MENTAL "ILLNESS" WHEN THE WHOLE WORLD IS FUCKING CRAZY?

It appears that "THEY" got away with it.  The massive loss of pension funds.  The sub-prime mortgage crisis.  The bank bailouts and subsequent bonuses.   Was it the thrill that drove them?  Hysteria?  Walking Wombs?   Are "THEY" really just shoplifters, except that "THEY" lifted the whole shop, the mall, and the parking lot?   Have you seen the abandoned malls in the US?
Like scenes from Dawn of the Dead.  Eat brains, indeed. 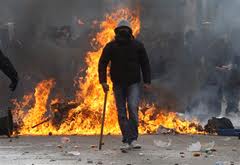 Which finally brings  us to the "riots" and "looting".

We express moral outrage and seek to destroy young lives who were drunk and made a mistake.  Was this just not a way of combining the shopping experience with the tailgate experience? Upscale dumpster diving?
Simply eliminating the middle man?   You've seen the markups at some of these stores.  It's highway robbery!
If you want it, here it is, come and get it.  But you better hurry cause it's going fast.
Pile it high and watch it fly!

The Social Networks struck back with a "Shame the rioters" campaign.
How about a Shame the Bankers campaign?

Can you identify the criminals?

No Rush To Judgement

We were sitting in the car listening to the CBC, as all good Canadians do, when the guy being interviewed was talking about the audio vers...