"In Canetti’s system, production is nothing but “the modern frenzy of increase.” Since “increase” is a characteristic of crowds, production becomes just another instance, a double one, of the crowd gone wild, for goods and consumers each make up a crowd." 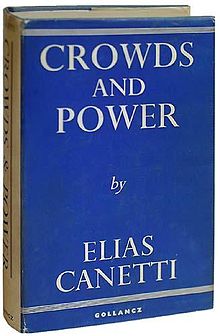 Here we sit broken hearted
Came to sip
but when the crowd departed
The Cup became glass
Our City lost all its Class
to an Unruly Mob
who looted Lord Stanley's fob.
They lobbed
newspaper boxes
and looted the Bay of watches and clockses,
Time stood on its ear
as all watched with horror
The City's aflame,
and now we're the poorer...
For these louts and these goons
Their 15 minutes secure
Like their chums from '94
the hockey game was a blur.


The nimrod natives were restless
fuelled on Booze, and blood on the bongo
And in the flash of a flash grenade
We forgot about  Luongo.


It is a "world class city " til
you get poked in the eye
stabbed in the gut,
while on-lookers stand by