Sometimes you have to wear the stretchy pants... 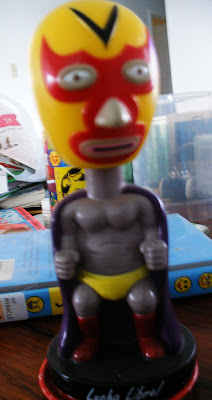 Mexican wrestler bobblehead has the shakes
like Parkinsons for toys
Collect them all:
Cancer Boy Bobblehead
Heart Attack Dense Bobblehead
Transgendered Barbie Bobblehead
The possibilities abound, and shake a bit too
For a good shake, read Stanley Elkin's The Magic Kingdom.

"Abandoned by his wife and devastated by the death of his twelve-year old son, Eddy Bale becomes obsessed with the plight of terminally ill children and develops a plan to provide a "last hurrah" dream vacation for seven children who will never grow-up. Eddy and his four dysfunctional chaperones journey to the entertainment capital of America—Disney World. Once they arrive, a series of absurdities characteristic of an Elkin novel—including a freak snowstorm and a run-in with a vengeful Mickey Mouse—transform Eddy's idealistic wish into a fantastic nightmare." http://www.centerforbookculture.org/dalkey/backlist/elkin.html#magickingdom

Since the blurb above does no justice for the novel, we present the NY Times hyphenated dictum:

"As always, Mr. Elkin plays the crazy music of his prose—takes off at the hint of a theme on his soaring funky riffs and jazzy blue notes. Not only among Elkin's best works of fiction, but a comedy that cuts so many ways that it leaves us bleeding with laughter."—Christopher Lehmann-Haupt, New York Times

It is Sunday, and I'm in a weird Sunday kind of mood. Drove the family to the airport for their Sun vacation get-away at 4:30 (OUCH) took the dogs with me to minimize the noise for the rest of the sleeping household, returned about 5:30 and we all went back to bed. Thought it was 11:00 so I woke feeling refreshed, only to discover it was really 9:00. Now I feel the lack of sleep. Read the newspaper, scanning for jobs, and the inevitable collapse of our local hockey nightmare. Still waiting for the call from unnamed rock group to "seal' the deal for the first of two big benefits for Mr. Hard.

Some people give without asking. Right away. No questions asked. Special shout out to the Pointed Sticks, Frank Frink, Swank, Dark Blue World, Sandy Scofield, John Korsrud, Clare Love, etc. Others, you call and immediately its What can I do, of course, I'm in.

And still others...what are they thinking...I don't know because they aren't talking. I'm getting the Silent treatment. Doctor, there's a radius clause in my contract (that sounds like something you should get checked out). I hear its bad for him but did I tell you about my aunt who had a dog with wheels for legs.....the list goes on.

Hey Les, it's all just bizness, don't cha know. Well, excuse me, but there is a prince of guy who would give any one of you Schmohawks the button down shirt off his back. And he is lying on his back in a hospital in Bellevue with a parade of friends bringing him a picnic because he deserves a parade. So do something.

I'm talking one night....a few hours....and we have the opportunity of raising what some of us earn in a year for a guy that has no health insurance, the SOB's responsible have no insurance, and ....and.....Calm down, Les. It's only Chinatown.

It's all going to work out. We'll have the shows. We'll have the picnic. We'll even have a parade, for chrissakes. I'll be the one out in front. You'll know its me because I'm the one giving my head a shake.