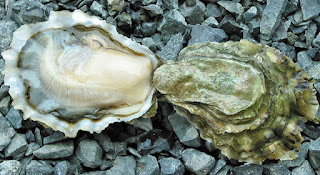 The oyster may be the most sublime food.  They are definitely one of most sensual.  More than food, they are passion and metaphor.

On the outside, we feel sharp, craggy calcium carbonate layers of oyster shell, self created by secreting proteins and minerals from their mantle extracellularly, the oyster constantly growing new layers of shell, their physical presence enlarging as they grow.

This hard and dangerous exterior holds its secrets tightly, as opening an oyster, ah shucks, is an art form itself.  There are specific tools needed, the oyster knife, wielded by the expert shucker, old Shucky, careful, you may want to wear a glove made of metal mesh, otherwise risking cuts from the shell or a slip of the knife. But once the vise-like grip of the muscles, holding its inner secrets intact is broken, a salty brine weeps.

Inside we feel a shell so smooth and porcelain. You may even find a pearl! And then there is the oyster itself.  Shimmery, moist, so many layers of feminine deliciousness.  This oyster object of desire, slurp worthy, your tongue wants to explore the folds and lips dare I say of the smooth little button of muscle at its centre.

Or you might just want to slurp it dow, drawing it into your receiving mouth, letting it slide down your throat, the oyster and the brine, accented with the tang of lemon or perhaps a bit of vinegar, a splash of hot sauce or a mignonette, which translates roughly into "cute, small, and tasty”.

I was reading a Substack post today from Alicia Kennedy, about her vegan relationship with the oyster- she makes an exception for this bivalve.  And I wanted to comment on her page with my most memorable experience with oysters, but I was shut down by her Subscriber paywall- no money, no comments welcome.

So here we are, inside my own non- paywall.  Here, my friends, is my memory of the night of Oysters and Stout where I met the infamous Oysterman, Brent Petkau.

Brent is a mountain of a man, big beard, big laugh, and a generous knowledge of all things oyster.  He is the Oysterman.  https://vimeo.com/32602676?embedded=true&source=vimeo_logo&owner=3637760

It was a special evening of oysters and sampling of Stouts, with Brent supplying the oysters, and the liquor store and my friend Craig Noble supplying the stout and information on how to pair with oysters.
I think I ate about 25 oysters, most were smallish, and the stouts were delicious, and at the end, I had sort of shocked myself with how many I had consumed.
But it was more than eating lots of oysters, it was an ingestion of knowledge of oysters and stout, most of which is forgotten.
Growing up, I remember some of my family having oysters, normally cooked, breaded and pan fried, how an old brother disparagingly compared the oyster to another bodily fluid, and how that aversion to oysters later became a desire to devour.
Which brings us to the oyster loaf, which is a Mills family tradition of hollowing out a loaf of french bread and adding back in pan fried breaded oysters, bacon, tomato and hopefully something green but I'm not totally sure.   Sort of our Pacific Northwest take on the Po' Boy.  It is then cut into slices, and consumed with much alcohol.   Whether it was the oysters or the alcohol that later lead to laughter then tears, is unclear.   Most likely the alcohol. 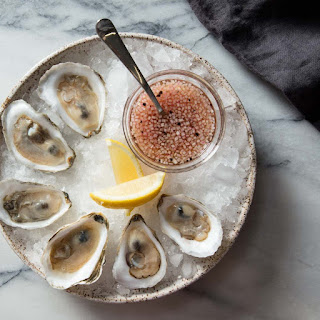