COUNTDOWNS, RECOUNTS, RECANTS, AND THE DO'S AND DON'TS OF NEW YEAR'S EVE. 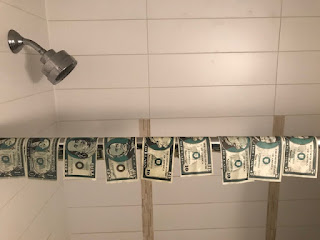 Just before it reached midnight, the singer said the band would not be halting the next number for a countdown.

As a veteran of many New Year's shows, I was horrified.  This is not right, I said to myself.   And I seriously considered going up on the stage and counting it down anyway.

And so began 2020.  We have been counting ever since that moment in time.   Counting the number of cases, the number of unfortunate people ( Fathers, Mothers, Sons and Daughters) who have succumbed to this virus.  In the United States, the numbers are well over 325,000 people.  It can be argued that if that country had a leader who did not mock this virus, and insist it was a hoax, thereby inspiring many many many people to buy into a false narrative, that many less would have died.  But all the second guessing won't bring them back now.

I used to love New Year's Eve.  As the singer in a band that was kind of an ultimate New Year's Eve band, I loved to count it down.  One year, in 1993, we played a show at a small restaurant that had gone out of business prior to the gig.   We have sold out the show, and by the time the show happened, all the regular staff had been laid off.   So a local Narcotic/Alcohol Anonymous group volunteered to help out by waiting on the customers.   Around 11:30, I noticed that the hats, and noise makers were not distributed.  The staff was not ready with the champagne.   So I took matters into own hands and started the distribution of hats and noise makers.  I popped champagne bottles, I rushed around trying to get it all together, and get the band on the stage ready to play.

The temporary staff had fallen off the wagon, and were not much help.  By the time I had miraculously handed out all the paraphernalia, I looked at my watch.  It was 12:05.   There were no cell phones or internet, and we were a closed bubble in that little restaurant.   So I got on the stage and did the act.

I pretended that it was still 11:59 and it was time to count it down.