To live a love you got to be part of 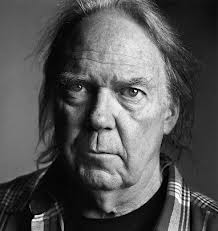 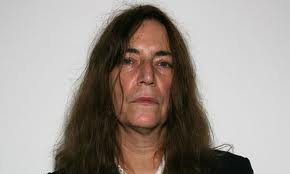 On November 22, this coming Thursday,  my long time friend writer/filmmaker Peggy Thompson and I will be going to Montreal to see Neil Young and Crazy Horse with Patti Smith Group. Rock music has been called a young man's game, yet both of these artists well into their 60's are making some of their most vital work.
Musically they have different styles and methods at play, but share a rawness, an urgency, and the recognition that their every move is a following of the muse, the creative fire, without regard for commercial implications.
In recent years, Patti Smith ( born 1946) put out a memoir, Just Kids, a new album, Banga, as well as shows of her photographic arts.  Neil Young (1945) just released a memoir, Waging Heavy Peace, and in the space of 6 months, two albums, Americana- his reworking with Crazy Horse of American folk songs, anthems, and campfire sing-a-longs, and Psychedelic Pill- the new double album which he will be featuring in concert at the Bell Centre in Montreal.

It was a number of months ago at a dinner party at Peggy's house.  I played for everyone  the new Patti Smith album Banga.  We all remarked on how good it was, usually with the qualifier of "especially at her age".   One of my greatest regrets was not seeing her play live back in 1978.   I had never seen her perform live, but did you know that Patti and Neil Young  are playing together in a few Eastern Cities- New York, Montreal and others.   Would that be amazing to be able to see both of these musical and cultural heroes in one place?  Peggy agreed and casually said, why don't we go see them.  She admitted that she had not seen either artist in a live setting before.  The very next day, I searched for tickets in New York, and then noticed that they were also playing in Montreal.  So I did a very impulsive thing.  I bought two very expensive seats, and called Peggy saying we were going to Montreal.   Expecting her to be horrified at my impulsiveness, I was surprised to hear her congratulate me and immediately get as excited as I was.   We would go on a cultural road trip to one of the most cultural of North American cities, to see two of the rock gods of our youth. 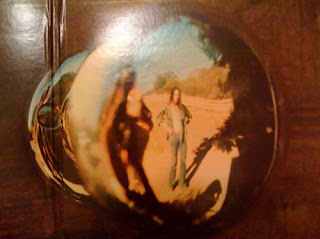 The first record that I ever bought was Neil Young's Harvest back in 1972.  I was 14.  It was a gatefold album with a rough finish on the cover.  For the kids out there, a gatefold album opened up, providing a  surface perfect for rolling numbers (as in Roll Another Number for the Road).  Harvest was his 4th solo record.  My older brother Brent has CSNY Deja Vu, so I was familiar with Neil, but this was the first album I had paid for myself.   Who would have known than thousands of records, tapes and cd's later, not to mention becoming a musician myself would ensue?

The photo above is a reflection on a doorknob, but the image of the skinny hippie Neil is clearly an outside image.  The image is further distorted by the surface of the knob. Is he inviting us in or shutting us out?  "I've been in my mind, it's such a fine line, that keeps me searching for a Heart of Gold, And I'm getting old."   And now he is getting old, just like me.   That was 40 years ago.  A few lifetimes ago.

"Old man look at my life, I'm a lot like you were."  Neil himself said, "Heart of Gold" is the song that "put me in the middle of the road. Traveling there soon became a bore, so I headed for the ditch. A rougher ride but I saw more interesting people there."

In the ditch or On The Beach, which is arguably my favourite Neil Young record.    "Sooner or later, it all get's real.  Walk on. "  Trying to make sense of death of the hippie dream, the Manson murders, Richard Nixon, Vietnam.  We went from the orchestral overload of A Man Needs a Maid, and There's A World, to Walk On, which was a logical follow up to Heart of Gold, in both a musical stylistic sense, and as well in a lyrical theme.  The search of Harvest leads to "sooner or later it all get's real."   Real meaning real fucked up.

The early 70's were formative for all the punks of the late 70's.  Neil Young was always Neil.  Honest, raw and going in his own directions against the grain.  Mr. Soul got burned with 4 dead in Ohio.  Down by the river, a cinnamon girl.  Love and only love.   "It takes a real friend to tell you, you are pissin' in the wind."

And then the darkest record of the Neil Young collection, Tonight's the Night, Neil's homage to his dead friends Danny Whitten and Bruce Berry.  This record was written and recorded before On the Beach, but delayed for two years by his record company.  But Neil was singing the song because he loved the man.   Tonight's the Night was more punk than any punk band.   Commercial suicide.  But it had to be done.  The songs had to be sung, and the stories had to be told.   In Neil's opinion, this was the record that came the closest to art.

In New York on another coast another story was being written, and a different art was being created.   Tom (Miller) Verlaine and his buddy Richard (Meyers) Hell (born 1949) moved from Kentucky in 1969 to New York.  Patti Smith and her boyfriend to be Robert Mapplethorpe also made the journey.  It is hard to believe the seeds of the punk movement began in 1969, but then again, why is it so hard to believe?  Before punk, there were angry hippies, and Beats.  Drugs, sex and music were all invented about the time of fire.

I was 15 when we moved back to Canada from the US.  Uprooted from my friends, I did not fit in to the cliquish West Vancouver neighborhood we moved in to.   My dad moved us back only ten years after moving us to the US, both for business reasons.  In the meantime, my Wonder Bread years, I was naturalized an American citizen.   I didn't know it at the time, but in the eyes of the Canadian government, I apparently lost my Canadian citizenship, having to apply years later to get it back.

I mention this as background to show the time of the early to mid 70's was a time of displacement, uncertainty, and great change.   As many of the hippie dreams turned to wasted naps and nightmares,  an ennui set in.  West Van was overcast, grey, stuffy, and conservative.  Oregon, where I had lived, was wild, awakening to drugs and sex, and politically both conservative and progressive.  I closed my bedroom door and retreated to the world of my musical heroes, reading all the various magazines of the day from Rolling Stone to Creem to later on NME, Melody Maker , Op, Village Voice and even Interview.   It was a great time for magazines.

It was in Creem that I first began to hear of Patti Smith, a poet, somewhat draggish, herself in love with Rimbaud and the Rolling Stones, a fan's hallucination.  The Boy Looked at Johnny, Johnny wanted to run but the movie kept moving as planned.  The Boy took Johnny, he pushed him against the locker, he drove it in he drove it home.....Horses, Horses Horses.

Long May You Run, Neil's song for a beloved car, but with a picture of a rider on a horse on the cover.
We were escaping, running from the wreckage, running to a utopian future, laughing hysterically, hallucinations were common, drugs were commonplace, sex was reportedly casual.

Concurrently, there was glam and sexual confusion emanating from Europe and England, throwing their influences in the mix.   Bowie, Roxy, Bolan, beautiful men edging toward a breaking down of barriers.  Even the much maligned Disco had its day ( or night to be more accurate).  Boys will be boys, unless they are girls looking like boys, or boys wanting to be girls, or boys looking like girls.   Patti Smith was a girl, but androgynous in her oversized white male collar shirt and skinny tie, and tight black jeans.  She sang as a woman who was really a boy, who was into boys. Heterosexual.  Homosexual.  The lines blurred.  It was a confusing, exciting time and a further stretching of the boundaries we had rejected.  Neil had jumped from the mainstream to the ditch, and Patti was never mainstream, she was a visionary outsider, coming to rock as a poet, a shaman, a woman possessed.

Which was all very attractive to me personally.   Escaping from the boredom of "the straight life", I adopted personas in the theatre, taking on roles and memorizing lines.    I was going to be an actor.  I quit my job in a bank, and went to acting school, singing Cole Porter, and falling in love with Method.
DeNiro in Taxi Driver was emulated for disappearing in his role as Travis Bickle, the psychokiller avenging Cybil Shepard by killing a hypocritical politician.  So into my roles as Bickle wannabees, that I actually kicked a friend in the head during a scene, and terrorized a young man with full complicity of an acting teacher who was either mesmerized or lacking her own boundaries.

So much of my attraction and relationship to both Neil Young and Patti Smith comes from the 70's.
I remember being in a lighting booth for a technical rehearsal the night Patti Smith played in Vancouver.  Another actor friend got to go and see here, while I was stuck in a booth in the dark.  It was the impetus to leave acting, as I was tired of young kids pretending to be something they had yet to even experience.   I needed to experience.  Everything.  I needed to be the actor, the writer and the director.  I needed to express myself on a stage, but on the edge ready to dive into the audience.