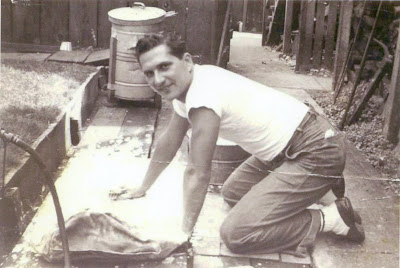 In April of 2006, my father died of congestive heart failure. Congestive heart failure is like drowning in your own body. The body produces more and more fluids and cannot get rid of them. This puts strain on the heart, which lacks the power to pump all the blood, causing more fluid to collect, making the heart work even harder until finally, the day comes when it can work no more, and you drown in your own body.
From 1979: (I was mad at dad when I wrote this poem)

the heart: it chokes the lodger in my throat
the father a man but not a family man
his love his company his children his interest
his use of vocabulary was economical
his power unconscious
he was not a bank,he said.
he said he was not a bank.

the heart: it chokes the lodger in my throat.
dense milt 1979

Despite the feelings this poem recalls from almost thirty years ago, my father and I had grown close as he neared the end of his life. My sister and I had travelled to visit him on what turned out to be his last day. His knees were the size of thighs, and his body was heavy and full of fluids. His breath was laboured, and he drifted in and out of full coherence. Still, he knew we were there. I don't remember him smiling, or having words of wisdom to impart. He was in pain, and he knew that he was dying. At one point, he wanted to go to the bathroom, so we helped him up and started to guide him to the toilet. He was really out of it though, and started to stumble. I was trying to hold him up, but he ain't heavy, he's my father. The weight was simply too much for me to keep him vertical. This is why they call it "dead weight". My sister went to get nurses to help, and it took about 4 or 5 of them (and these were all big overweight American nurses) to lift him and get him back to his bed. From then on, they told him that it was bedpans or diapers as he would not be allowed to go on his own.
Knowing the force and pride of this man, I knew this was not in his plans. It seemed that he would not be long for our world. We said our goodbyes, and he held my hand and thanked us for coming. I remember the feeling of my father's hands. Like other hands of his generation, they were the hands of men who worked with their hands- bigger, meatier than hands today. Our relationship which had not always been so close, had changed (for the better) with the birth of my daughter.
Growing up, my dad was often "not there" for me. I grew up thinking that somehow this was my fault, but found out after he died, when I had the opportunity to spend some time with my second oldest brother, that my father had not been there for him either. He related stories of my mother getting him up to go for hockey practices on the other side of town in the nether hours of the morning. He would take the bus on his own. Where was my dad in this? Probably in bed, although it was entirely possible that he could have been active in coaching other people's kids as he was always more comfortable in the company of strangers.
About a month before he died, I woke early in the morning to the type of dream where you are almost conscious. Your dream plays like a movie, and you are the director. My dad had become a very good grandfather; he was much better at that than being a dad to us. He was always telling his grandkids wild stories of his youth. We would listen as he told us how he was taking this girl home up on Dunbar St, then discovering he didn't have fare for the bus, and had to walk all the way back to east Vancouver. He stopped at the Aristocrat on Broadway and Granville as he had enough for a coffee, and met up with a neighbourhood celebrity who was a prize fighter. The prize fighter asked Freddie (my dad) what he was up to, and he said he was on his way home. The fighter said hang with me for the rest of the night and I'll get you home. He then gave my dad a giant roll of money to hold for him, as they embarked on a crawl of epic proportions through the many afterhour places of ill repute. This, like the Johnny Cash story, was only one of his stories. There were many, and they seemed to improve upon each telling. Never let the truth get in the way of a good story. As my father neared his death, I worried that his stories would die with him. I thought what about all the ones he had yet to get to telling; no one would ever hear them again.
As I lay dreaming, I reasoned that I was created from dna that came from my father. Perhaps memory could be stored in dna, then if I could just concentrate hard enough, maybe I would be able to tap into his dna inside of me and "remember" all the stories that he knew but had not had the time to tell. I remember trying very hard to drift back. Just as the memories started to flood back, I awoke and once again they were lost.
Posted by dense milt at 12:24 AM
Posted by dense milt at 12:49 AM