Don't Try This At Home 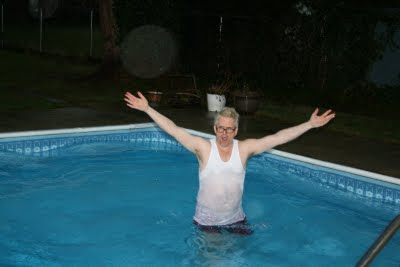 The following post was originally posted
Sunday, August 26, 2007
It has been two years three months and twenty two days since that night.  I count my blessings I can still do all the things I love to do.  I still need to exercise more and lose that extra twenty lbs, but its good being on the green side of the grave.  I would like to thank all the wonderful people who have written to my blogs, commenting on what I write. Thank you Rachel in CA for your wonderful words.  I'm sending out positive energy to you and  your family.  There is always a light if look long enough.  Even when darkness threatens to press in from all sides, there is light.  There is light in the beauty of a smile, in the child that looks for comfort, in the animals who share our houses and give only love,  This is a story of survival in the face of that darkness.


One of the things I have learned this summer is that I would not recommend having a heart attack while flying. Now I'm not totally sure that was when it all happened, but I do know I had a heart attack sometime between 7:00 Thursday evening and 10:00 Friday evening when I checked myself into the emergency ward of the local hospital outside of Atlanta.

As I explained earlier, I have been feeling lousy since the Thursday evening, in mounting waves of discomfort, nausea, cold sweats, shortness of breath, and this incredible feeling that my lungs were on fire, and every breath I took was increasingly difficult. My good friend (best man to be precise) Broadway Sol Goodman and I had left his apartment in Long Island City headed to the airport by subway first.

"This is the right line for JFK", he said. I said the ticket says La Guardia. Ooops... We exited the station and crossed the street, finding the right line to take us closer to La Guardia. Even though I was travelling light, the weight of the baggage, the humidity, and what I later learned was the symptoms of a heart attack, started to weigh on me.

I move on to the airport bar, which is very full, this being Memorial Day weekend in America. I contemplate what kind of food goes best with a major health crisis, and decide that beer is what has got me this far, so it should be good enough to help me get where I need to go.

In America, nothing is done half-ass, except perhaps wading into a hornet's nest of blood hatred in the land of sand and oil like a drunk at a kid's pinata. The beer was gigantic, but even with my major health crisis, I was able to get most of it down. Not all of it, which shows that something was definitely going wrong for me.I made my way to the boarding gate for cheap flight from NYC to Atlanta. My nephew (and godson) had become a high school dad, and they were having a baptism for his son. I was totally pleased with my week long stay in NY with my best bud; we had turned the clock back so far that a spring had sprung. But I was looking forward to getting to Atlanta and being with my family. My mother had surprised all of us by booking herself a ticket to join in the fun, and my sister was coming from Toronto where she had been on business. It looked to be a great finish to what was already one of my best vacations. Too bad I couldn't breathe.

The lounge for departure was overfull, with many people hanging around trying to get home on a standby ticket. Standby, as the very funny Indian ticket agent informed all who cared to listen, was what you had to do when waiting to see if someone might not show up. If they all show up, then you keep standing. One guy was told that it was likely he would be there until Monday (this was Friday). Even though I had a ticket, my fear was that I would be left behind in this hot, humid, stinky departure lounge suffering from what I did know for the next few days. Finally, the plane boarded, and I found my seat. They informed us that just as soon as everybody got on and we were able to leave, they would then turn on the air conditioning. Until then children, you are all to sit and sweat and enjoy the fact that you were flying for next to free.

All very well except that every moment I am having to making bigger deals with God just to get me to Atlanta. I thought maybe I had come down with pneumonia since I had that in 1989, and the feelings in my lungs were similar. I tried concentrating on my breathing, concentrating on how an extremely tall black man with a ipod could actually fit into one of these sardine size airline seats next to me. He was prepared with his tunes for the trip and all I could do was hope to hear some kind audio exhaust; alas, his earphones were top quality, and no leakage of the tunage was possible.

It's amazing just how long an hour and a half flight can be when you are having a heart attack. The deals were made with God and Devil and I landed in Atlanta drenched in my own bodily liquids. I turned my cell phone on, and my sister let me know that they were waiting for both me and my mother, who was fortuitously coming in about ten minutes after my flight. I informed her that I was feeling majorly lousy, and not to expect the party animal I can be.

The airport in Atlanta is so big that they have a subway train that takes you from the gates to the baggage area. I made it to the train, and held on for dear life, getting to the baggage area and my waiting family. We picked up my mother and headed in airconditioned SUV to suburban Atlanta. It felt so good to be off the plane and among my family, that the symptoms of the heart attack ebbed until I arrived at my sister's beautiful house. I told them I thought maybe I had pneumonia and they hooked me up with some killer antibiotics that reported killed the walking pneumonia. They apparently were not so effective for myocardial infarctions. After a tour of the house and up the stairs to the deck, I informed my brother-in-law that perhaps it was the "widowmaker", a term I had picked up after reading the great Joan Didion book, A Year of Magical Thinking. My brother-in-law said if that is what you feel, you should get it checked out. I called the 1-800 number on my extended health care card and they said if you are having chest pains, get thee to a hospital, dummy. OK, they didn't say dummy, but by now, that is what I was thinking. As I was told later at the hospital, I was extremely lucky that I was still living.