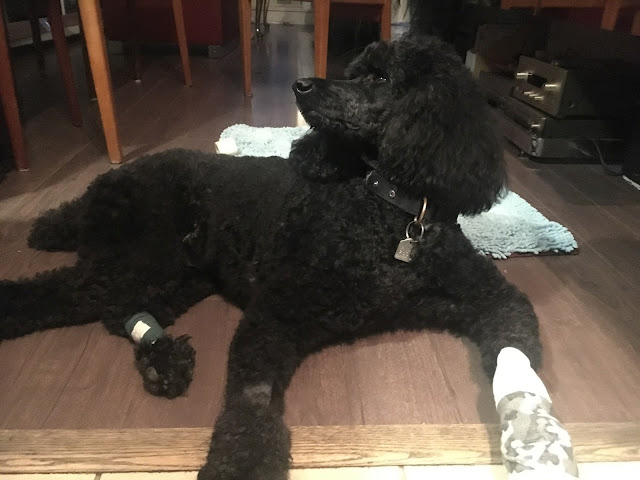 Toodles is resting.  She just had another toe amputated for cancer.  This is her fourth amputation, two on one paw, one on another, and now this one.  She is wobbly but resilient.
One thing about Toodles is her silence.  She rarely barks.  You know it is serious when she does. She barks about once a year.   Which is compensated by her partner in Crime, Maisy.  She is a silent sufferer.  Her face is hard to read the emotions.  We project what we think she is thinking,which has developed into the Toodles voice.
For years, we have made up the Toodles voice, which in our imaginations is close to that of Pinky from Pinky and the Brain.  Maisy is the Brain.  She is the evil one, the terrorist, the terrier. Little Miss Bossy.  Toodles is the Recalcitrant Poodle, She Who Always Brakes, the pure breed without papers.
She is the undocumented Pedigree Standard Poodle.
Toodles was the runt of the litter.  When we got her at 8 weeks, she was 4 lbs.  Not much more than big eyes, fur and bones.  And poop, which she loved to eat.  So hungry that she ate her own poop.
I have jokingly called her My Sub-Standard Poodle, as she is a bit smaller than a real Standard.   More of an apartment size dog.   Even at close to 50 lbs, she thinks she is a lap dog.  "I's only a little dog." We think she says in the silly Toodles voice we made up.
My daughter named her Toodles.  That was a phrase my wife's father always used when we would leave, Toodles!  As in Toodle-OO.  Toodles the Poodle.  The comic potential was always a part of being a poodle parent.
Her disposition is sweet, but relentlessly solicitous.  She nudges you with her wet nose, until you pet her head, tell her she is beautiful, etc.  She does that with all of us, and any stranger that comes to the house.  She insinuates herself, until you accept her advances, or have to actually push her away.  Which is only a stalling method, as she always comes back to try again.  No does not mean no to this poodle.  No means if I just wait a bit, they will forget how obnoxious I am.

Toodles also has a dark secret and shame that she likes to keep hidden.  We think she walks upright in the apartment when we are away.  Nothing is safe from her inquisitive search.  Her special predilection is panties.  Panties from females.  She has eaten the crotch from underwear for years now.  We think that she considers herself a French Designer of Crotchless underwear.  Recently, she expanded her repertoire to men's boxer briefs. My daughter says Toodles is now gender fluid.   It is a new line of open-face boxers for the man that is always ready to "show and go".  Not everyone's taste, but unlike my female housemates, I saw the ingenious method to her madness.   These could come in handy some day.  Or so I thought, until getting ready for work one morning, when I reached into the drawer to grab yet another pair of black boxer briefs, only to be surprised the one I selected was the Open Face, which can be a bit "drafty", and certainly not appropriate for a work environment, where keeping your junk secure and hidden is a prerequisite.  Still, I did not throw them out.....

We are not sure of the reason for the cancer, although apparently it is common in black dogs, in particular Poodles and Black Labs.  Everyone has their weaknesses, and the toe is Toodles' Achilles Heel.  Still, she is a noble beast, and a  proud warrior (beware squirrels- here comes the Mighty Poodle-Hunter).  I would write more, but there is a wet nose nudging me.