The Fire and Light of Howard Rix 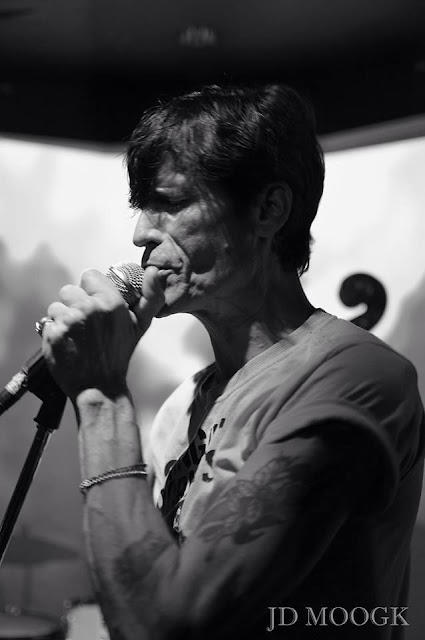 On September 17, 2015, the fire and the light that was Howard Rix went out leaving a vacuum in many people's lives and hearts.  According to my good friend Chris Crud, "Howard Rix passed away at 7:09 pm on Sept. 17,2015 at VGH.  He suffered a severe asthma attack followed by two heart attacks which lead to devastating brain injury. He passed peacefully with loved-ones at his side."

Howard Rix was a singer's singer; he had a voice that was a true authentic gift.  His sinewy presence on stage was always "on".  I never saw him give a half-ass performance.  Make no mistake, he owned it when he was upon it.  He gave us his all, and then some everytime, from playing on the street to the largest stages in our little town.

We know that a great voice is needed to make someone a great singer. Some people are born with great voices, and some people work and train to further develop their instrument. And some people like myself, try to do the best with what we have.

But Howard Rix was seemingly born with a voice that recalled many giants who came before him- greats like Elvis, Jerry Lee Lewis, and Iggy Pop. He brought a snarling beauty and depth to what he sang, because unlike some others who may have good voices, Howard was real.  He walked the walk and lived the stories in song that he told on stage.

My very good friend and former drummer,  Steve Taylor, who is a band leader and perhaps the epitome of cool,describes Howard Rix as the best singer that he ever had the privilege of drumming behind. Given the extensive list and range of superb singers that have graced the stage with Steve Taylor, and knowing Steve's unchallenged judgement in this regard, his praise of Howard Rix is genuine and notable.

But Howard was more than just a great singer.  He was a great performer.  He brought darkness and fire to life, His range of performances, from the Stingin' Hornets, to GI Jive, to the Scramblers are legendary.  I had the misfortune of trying to follow him one night. I remember the night at the Chapel Arts with JFK, which also included the legendary Brian Goble. I had to follow Howard and my youthful hero Chris Arnett, two riveting performers if there ever was. I blew my voice out on two songs, and did a double knee drop and hearing them both snap at the same time with some ligament stretched beyond its limit as I hit the stage. Those knees were extremely painful for about 9 months.  But in a town littered with so much talent, and with so many great performers, Howard Rix stood out.

But what makes someone a great performer, not just a great singer?  Is it the way they control the stage, they way the band becomes one instrument behind them?  The way they look at you while you are watching them perform. You think you can see into their soul, and you also feel that maybe, they are looking right into yours?  I find it interesting that some of the most dynamic performers that I have known are also the quietest and sweetest unassuming individuals off stage.  Howard was that way.  He was a kind, soft spoken man who wrestled with his own demons, but he kept those demons private and locked inside, giving us just a glimpse of his darkness as we watched him prowl the stage like a Bengal tiger in our living room.

There was no denying the power or the ferocity; Howard Rix was dangerous. You could feel that with one swipe, he could knock you out.  But he had the grace and inner knowledge that gave him that edge on stage.  We knew he would kill it, but while we were doing that dance of death, maybe he would take time to play with us a bit before he took the big bite that would bring the curtain down.

In the past while, we have lost three giants- Dave Gregg, Brian "Wimpy" Goble and Howard Rix.
Our time here on this messed up planet is brief, much too brief at times.  Those people who burn the brightest will sometimes burn out faster that others, leaving behind shadow and smoke where once we only saw fire and light.  But our memories fill us with incredible joy when we marvel at their greatness and lives, and how we were so fortunate to know them, if even so briefly.  We are filled with so much grief and sadness at their passing, yet we are all just passing through,
Here is to the Fire and the Light that was Howard Rix.  Like the song he sang, "He lived fast, loved hard and died young, and left a beautiful memory."
Posted by dense milt at 1:36 PM