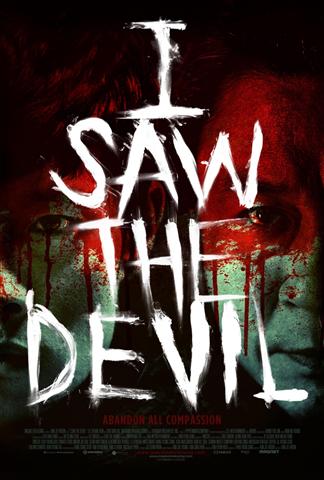 A dish best served cold.  Revenge is sweet.
Revenge is a balancing act. Trying to get back, trying to push the genie back in the bottle, trying to turn back time, undo, delete, cut and paste.
I Saw The Devil is a Korean film from 2011.  A  young pregnant woman waits in a car in the snow for a tow truck to change her tire.  She is talking on the cell to her husband, who is involved in the security business.
A yellow school van pulls up, and a man gets out and walks to her window.  Need a hand?
Hands first, then feet, then head.
She declines as instructed by her husband to wait for the tow truck.
Might be awhile.
Why is he not leaving.
Man with hammer at window breaks through the passenger side, dragging her over and smashing her skull repeatedly.  He drags her limp body across the fresh snow, leaving a trail of blood.
So starts I Saw the Devil.  The grieving husband vows to make the killer pay. To make his suffer. To get his revenge.  After catching a guy at his computer pleasuring himself, and smashing his balls with a hammer, the husband finally catches up with the killer.  He is in the midst of another murder attempt.  The husband beats him to within an inch of his life, and inserts a tracking device in the killer's mouth.  He smashes the killers hand with a hammer.  Lots of hammers.   And leaves him some money in an envelope.   What you say?  He didn't kill him.  No, his revenge will only be satisfied with the suffering of the killer as he made his wife suffer.  And so the duel is on.   A righteous man deep in grief tracking a serial killer, inflicting severe pain and then letting him go again.  The killer meets with his friends, a couple who are cannibals.  While they serve their revenge cold, and cooked, they also keep a young girl on a chain.  Sushi.   Hands first, then feet, then the head. 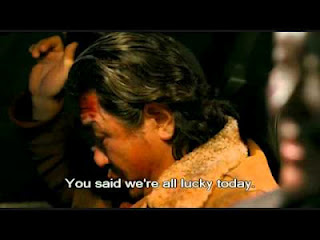 One of the best scenes is one in which the killer  is picked up by a strange pair in a cab.   The driver is a little off, and the killer can see the "passenger" has a knife that he is hiding.   So taking matters in  his own hands, he proceeds to create one of the best scenes of violence in a moving vehicle.    Korea has more going on than Gangnam  Style.
I Saw The Devil is  a masterwork of revenge and violence.   It is not a chick flick.
Posted by dense milt at 12:43 PM